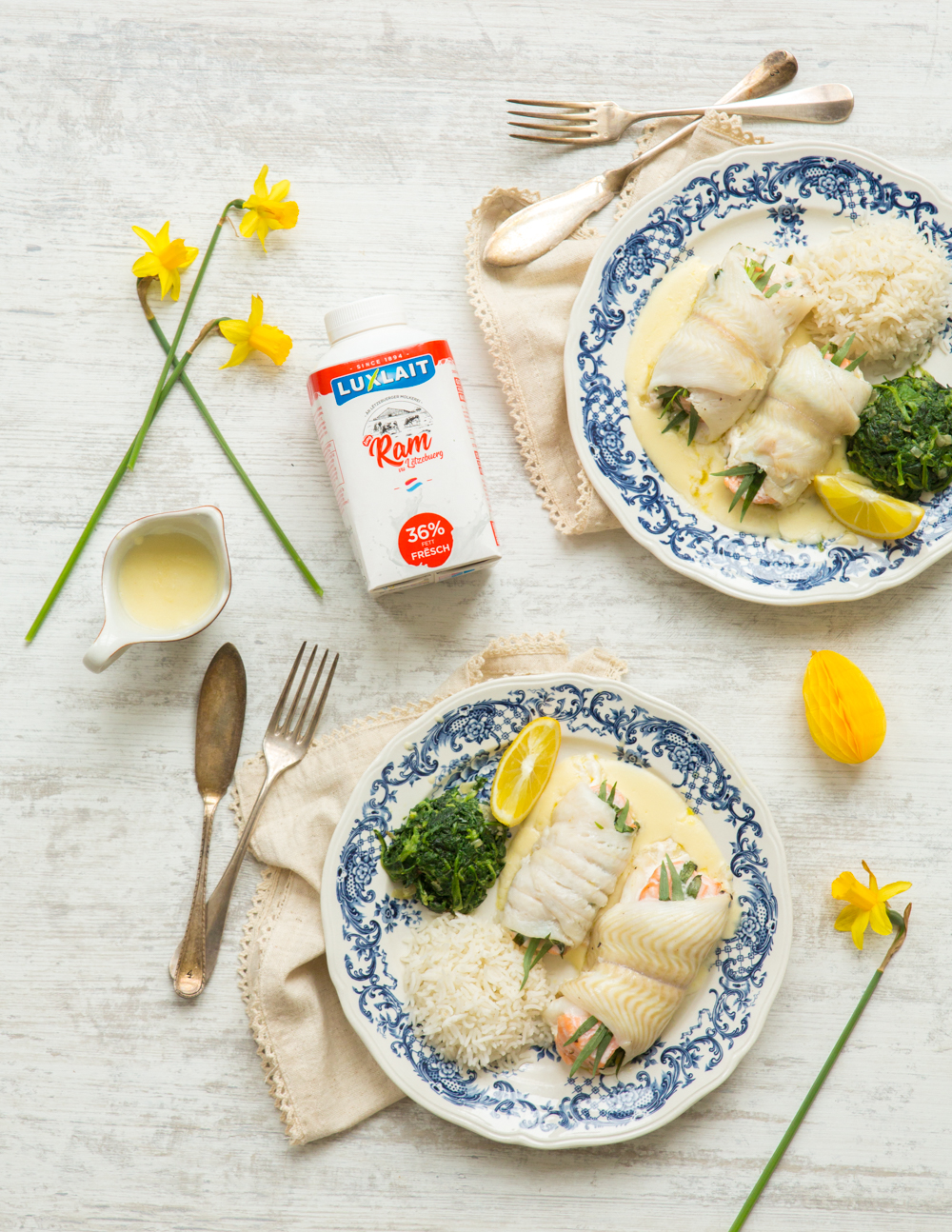 I love pairing the aromatic flavour of tarragon with fish, so these sole and salmon roulades are bursting with its herby goodness. They are served with a lovely cream sauce made with the juices that the fish releases in the oven. A fancy fish dish for a special occasion!

I’ve made this recipe for Luxlait, as part of our brand collaboration.

Cut the salmon into eight long slices. Lay out the sole ﬁllets, season with salt and pepper, then top with a few tarragon leaves. Place a salmon slice at the end of each sole ﬁllet and roll them up, securing them with a toothpick.

Grease an ovenproof dish that snugly ﬁts the roulades. Put the roulades into the dish, add the bay leaf and peppercorns and pour over the white wine. Cover the dish with foil and bake the ﬁsh for 20 minutes.

Meanwhile, prepare the rice and the spinach. Rinse the rice in a sieve until the water runs clear. Put in a saucepan with the water, the melted butter and a pinch of salt. Cover, bring to the boil and cook for 15-20 minutes until all the water is absorbed. Remove the lid, put a clean tea towel on the saucepan, cover with the lid again and leave to steam for 5 minutes.

Blanch the spinach in a large saucepan with boiling salted water for 1 minute. Drain in a sieve, squeezing out most of the liquid, and set aside. Peel and ﬁnely chop the onion. Peel and crush the garlic clove. Melt the butter in a large frying pan and fry the onion for 4 minutes until soft. Add the garlic and fry for another minute. Add the drained spinach and the cream and heat through. Season with salt and pepper, cover and set aside until ready to serve.

Once the ﬁsh is done, switch off the oven and strain the liquid from the ovenproof dish into a bowl. Put the roulades back into the warm oven while making the sauce.

For the sauce, melt the butter in a saucepan, add the ﬂour and fry for a couple of minutes. Add the white wine and leave it to cook for a minute or so, so that it thickens. Gradually add the ﬁsh juices and the cream in the same way.
Once you have a smooth sauce season with salt and pepper. Take the ﬁsh out of the oven. If there are more juices in the ovenproof dish add them to the sauce.

Put 2 roulades onto each plate and serve with sauce, spinach and rice.