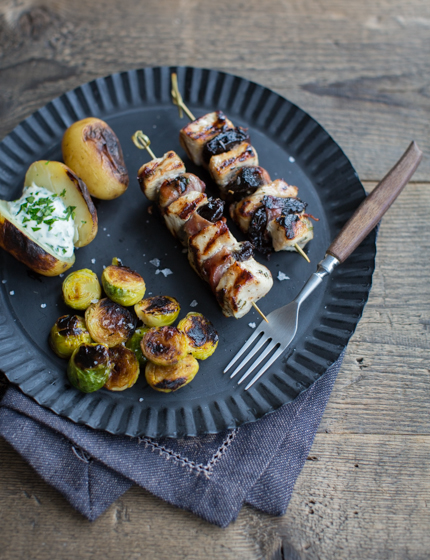 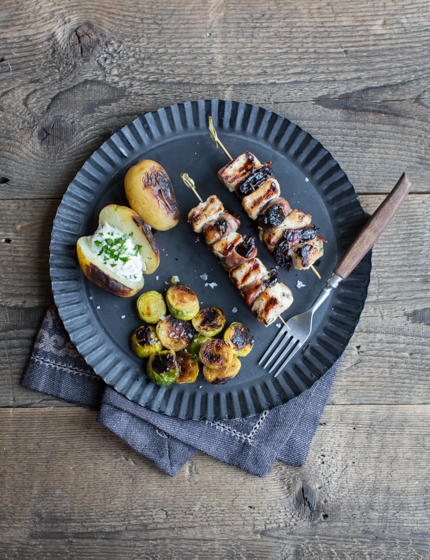 People always associate barbecues with summer – but for this season of Mastercook we decided to break the habit and get our candidates stuck in winter grilling!

Yet, winter barbecues can be great fun too! All you need is a sheltered space for your barbecue, so that it doesn’t get wet if the skies decide to open up…

What’s so great about winter barbecues is that you can play with warming winter flavours. So, for my winter BBQ recipe I’ve decided to use classic winter ingredients: prunes, brussels sprouts and bacon. If you wonder what the hell I mean with devils on horseback – they’re in fact bacon-wrapped prunes, which I’ve used in my pork skewers. They work really well on the barbecue and make winter grilling a total treat.

In a small bowl, mix the crème fraiche with the parsley and ¼ tsp salt and pepper. Refrigerate until needed.

For the skewers: cut the pork chops into cubes and put into a bowl. Season with the chopped rosemary, olive oil, ¼ tsp salt and pepper.

Cut the pancetta rashers into long slices and wrap them around the prunes.

Thread 4 pork cubes and 5 wrapped prunes onto each skewers, alternating between them.

After 15 minutes, the potatoes should be cooked through and the pork skewers done.

Distribute the pork skewers and Brussels sprouts between two plates, and serve the potatoes with a dollop of crème fraiche.