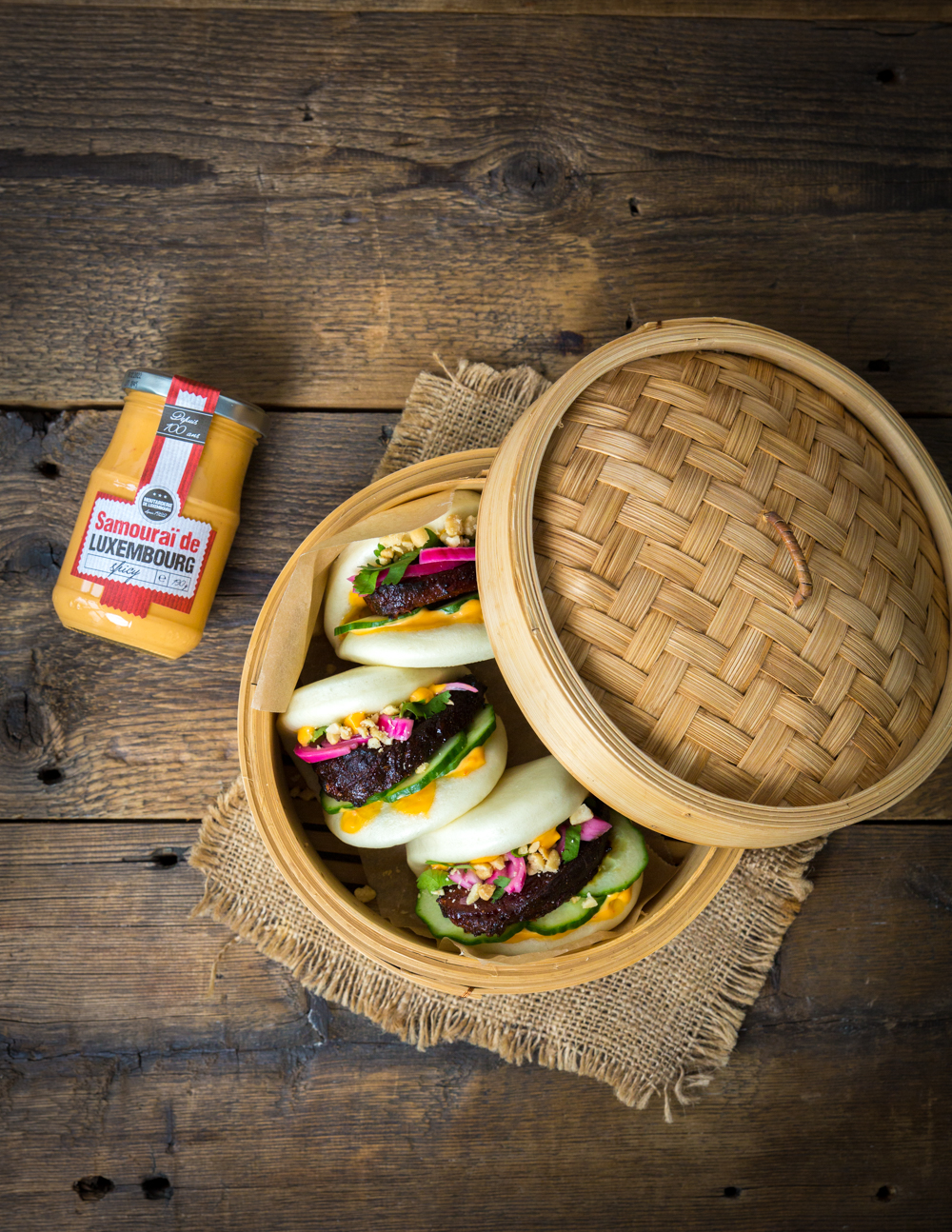 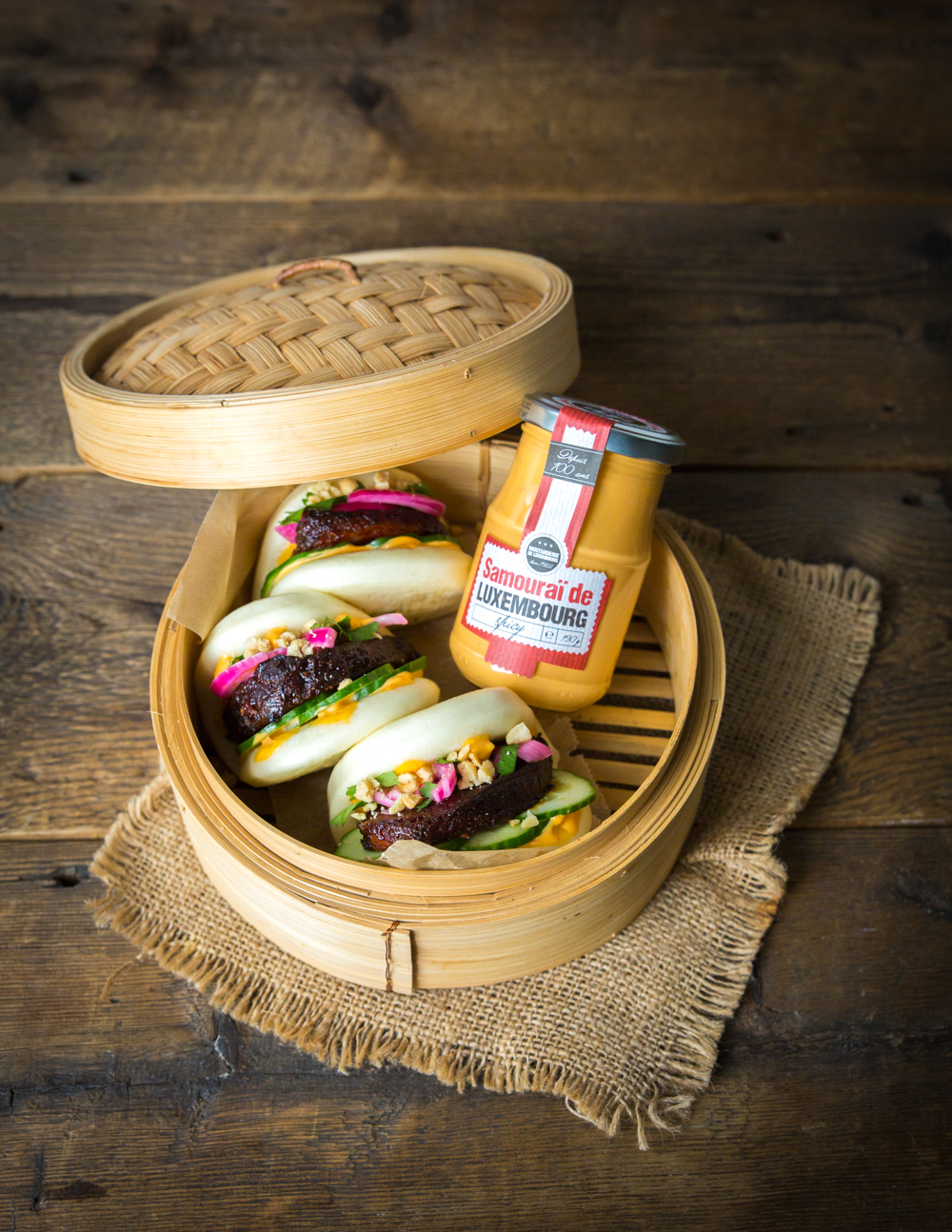 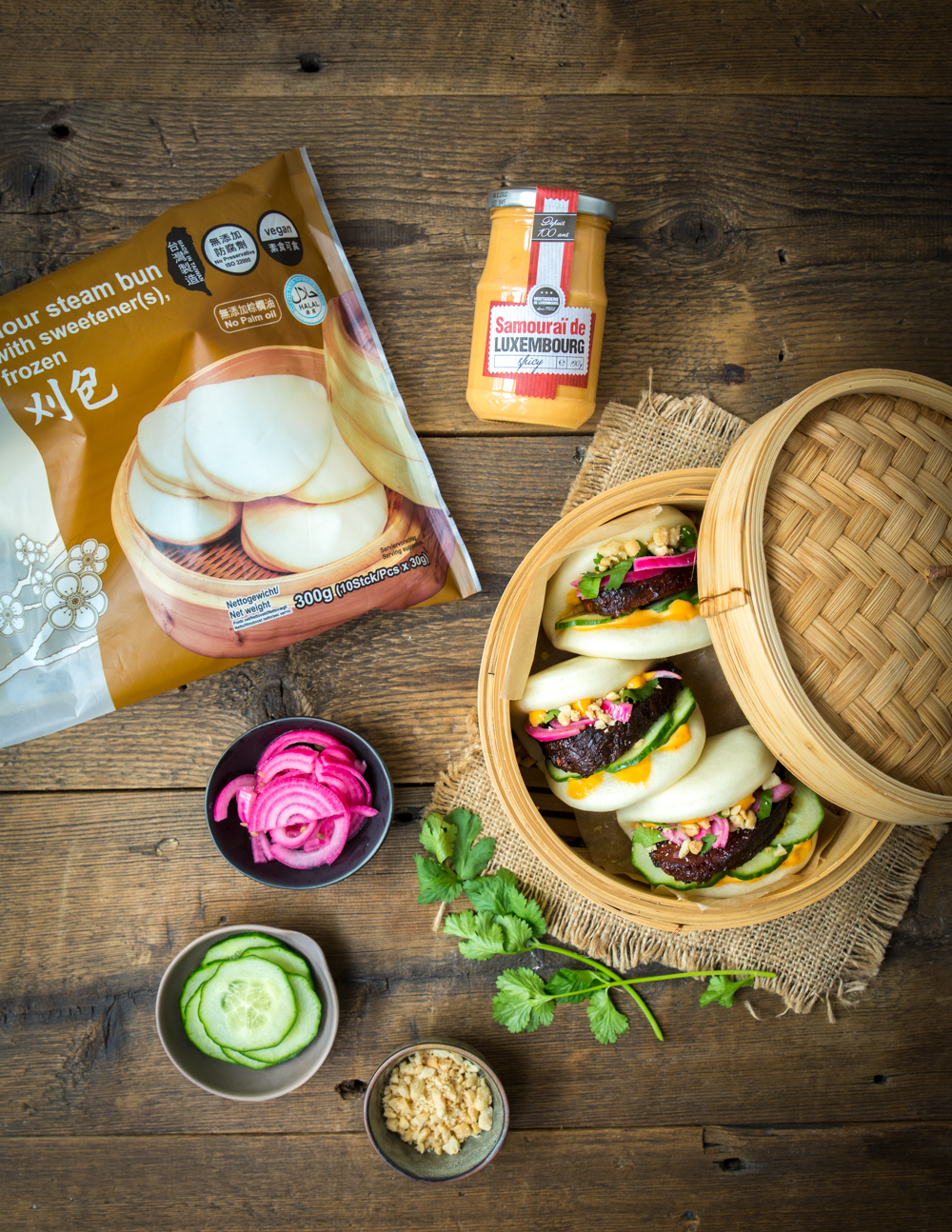 Bao Buns are the Asian answer to a burger. Fluffy steamed bread buns, filled with meat and pickles. They originally come from Taiwan, where they are filled with pulled pork, pickled cucumber, peanuts and lots of coriander.

For this version I am using Luxembourgish smoked meat – Judd – which I am cooking with Asian flavours. Combined with pickled red onions, cucumber, peanuts and spicy Samouraï sauce by Moutarderie de Luxembourg, this is an absolute winner of a recipe! It does take some time to make, but it’s so worth it!

I created this recipe for Moutarderie de Luxembourg, as part of our brand collaboration.

The day before you want to eat, prepare the meat and the pickles.

Desalt the meat: put the meat into a saucepan with cold water and bring to the boil. Once boiling, drain the meat, then put back in the pan and add the apple juice, beer, water, star anise, cinnamon and sugar.

Cover, bring to the boil and simmer for 2 ½ hours. Take off the heat and leave the meat in the broth until the next day.

For the pickled red onions:
Peel and finely slice the onion, put in a jar. Heat the vinegar, water, sugar, salt, fennel seeds and peppercorns in a saucepan until the sugar is dissolved and the liquid boiling. Pour the liquid into the jar with the onions, seal and leave to pickle overnight.

Take the bao buns out of the freezer to defrost.

Mix all the ingredients for the glaze in a bowl.

Finely slice the cucumber. Pound the peanuts to rough chunks. Chop the coriander.

Preheat the oven grill to high.

Cut the meat into 6 slices, then cut each slice in half. Put the slices back in the broth, adding more water to cover all the meat. Cover with a lid and bring the meat back to the boil, turn down to a simmer and cook for 3 minutes until the meat is hot.

Put a grill on top of a baking tray lined with baking paper, and arrange the hot meat slices on it. Brush the top of the meat generously with the glaze. Grill in the oven until the top is caramelized. Take out of the oven, turn the meat over and brush the other side with the glaze and grill again.

Steam the buns in batches for approximately 5 minutes (or microwave according to package instructions) until they are heated through.

Open the baos and put a bit of Samouraï sauce into each bao, stuff with a slice of meat, cucumber slices, pickled onions and coriander, then sprinkle with peanuts. Serve immediately.

*Kassler and Judd are both smoked meat – Kassler is easier to cut as it has less fatty parts, the Judd has a tendency to fall apart after cutting.

**You find packets of frozen bao buns at Asian supermarkets