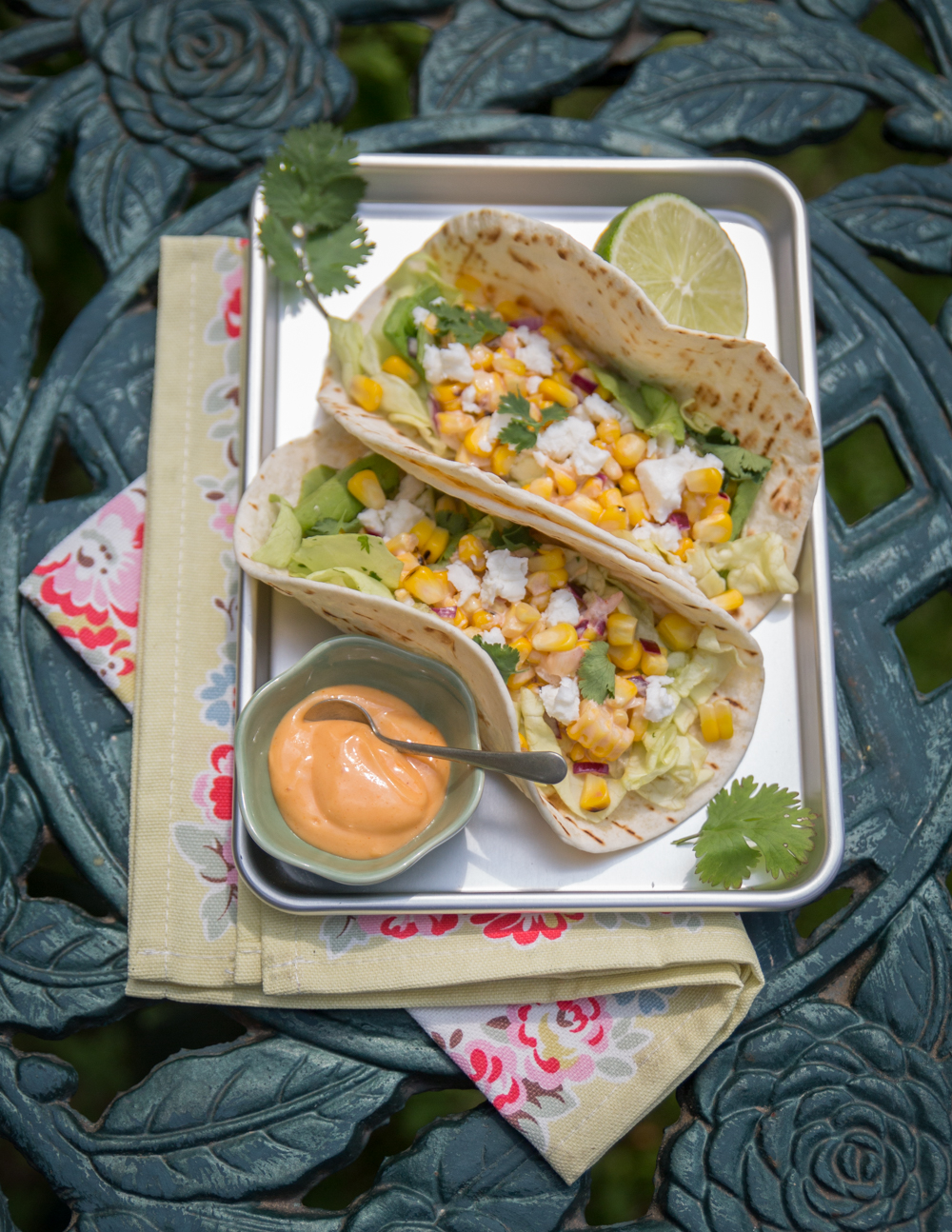 In Luxembourg we often have corn on the cob at barbecues, simply smothered in butter and sprinkled with salt. I love corn on the cob but I’m not a fan of the nasty fibres that get stuck in your teeth! Therefore, I would like to propose a new way to enjoy barbecued corn: in a taco! These sweetcorn tacos have surprised many of my meat-loving friends, who found themselves saying no to sausages and yes to my veggie tacos…!

I made these sweetcorn tacos with my urban golfing friends in this episode.

Light the barbecue and wait until it’s at a medium heat;this should take about 30 minutes. You can tell it is ready when the embers are glowing.

Remove the husks (if there are any) from the corn on the cob, wash and pat dry. Place each cob on a piece of foil and brush all over with melted butter. Sprinkle with salt and wrap the cobs in the foil.

Put the corn parcels on the barbecue and grill for 20 minutes, turning regularly.

While the corn is on the grill, prepare the rest. Finely chop the red onion and set aside. In a small bowl, mix the mayonnaise with the sriracha.

Place a soup bowl upside down into a wide mixing bowl so that it sits inside the bowl like a cupola. Place one corn on the cob on the base of the soup bowl and cut down along the length of the cob so that the corn kernels fall into the bowl. Alternatively, place the corn on the cob on a chopping board and shave the kernels off on there;this willbe messier though, as the kernels tend to spilleverywhere.

Remove the soup bowl and mix the corn kernels with the chopped red onion. Add the juice of half a lime, the sriracha mayonnaise and sprinkle with salt. Mix until the kernels are evenly coated.

Put the tortilla wraps on the barbecue and grill for a few seconds on both sides.

Transfer the tortilla wraps to plates and top each with a bit of salad leaves and corn kernels. Crumble some feta over each tortilla, then top with some chopped coriander.

TIPS:
• Add some fried chorizo slices if I you prefer to have a bit of meat with these tacos.