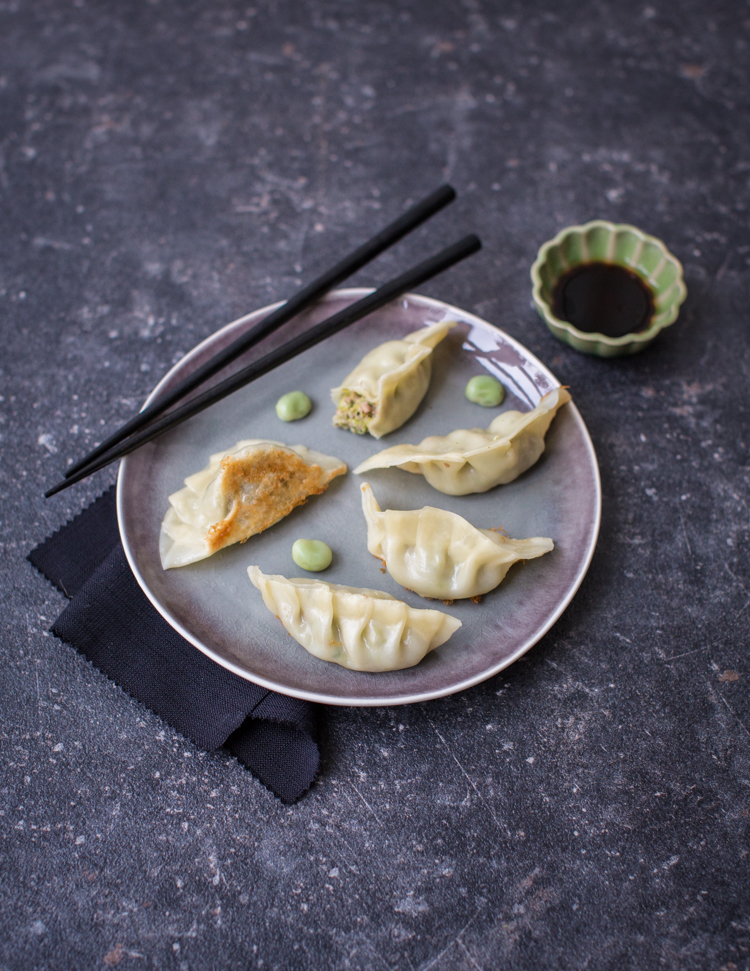 When I filmed in Hong Kong for my show ‘Anne’s Asian Adventures’, I ended up cooking with expat Mimi Ho. I wanted to make something that fuses two iconic Chinese and Luxembourgish dishes. And so my ‘Judd mat Gaardebounen dumplings’ were created.

Judd mat Gaardebounen is as Luxembourgish as it gets. A hearty dish of smoked pork collar with broad beans in a creamy sauce that’s flavoured with summer savoury (Bounekräitchen). In my latest book, I chucked the whole thing in a blender and used it as a filling for cannelloni. So, why not do the same, but stuff it in a dumpling?

These are really super easy to make – you just need a bit of time for folding the dumplings. As for the technique, there are plenty of great videos online that show you how to fold a dumpling, so best watch these and just give it a go. They’ll taste great either way!

Cook the broad beans in boiling salted water for 5 minutes. Drain, then rinse under a cold running tap to cool.

Cut the pork into chunks, trim and slice the spring onions. Put the broad beans, pork, spring onions, summer savoury and sesame oil in a food processor. Season with pepper and whizz until you have a chunky paste.

Put a heaped teaspoon of the filling in the middle of a dumpling wrapper. Dip your index finger into a small bowl of water, and moisten the edges of the wrapper, so that you get a wet circle around the filling.

To make potstickers: Put a bit of vegetable oil into a frying pan. Sit the dumplings in the pan and pour enough boiling water into the pan so it reaches up to half the height of the dumplings. Cover with a lid and leave to boil until all the liquid has evaporated and the bottoms of the dumplings are crispy.

To steam in a steam oven: cut out a piece of baking paper to fit inside a perforated steaming tray. Sit the dumplings onto the baking paper and steam in the steam oven for 8 minutes at 100°C.

To make the dipping sauce, pour a bit of soy sauce into a dipping bowl. Add a glug of toasted sesame oil and a bit of grated ginger and stir.

Serve the hot dumplings with the soy dipping sauce.