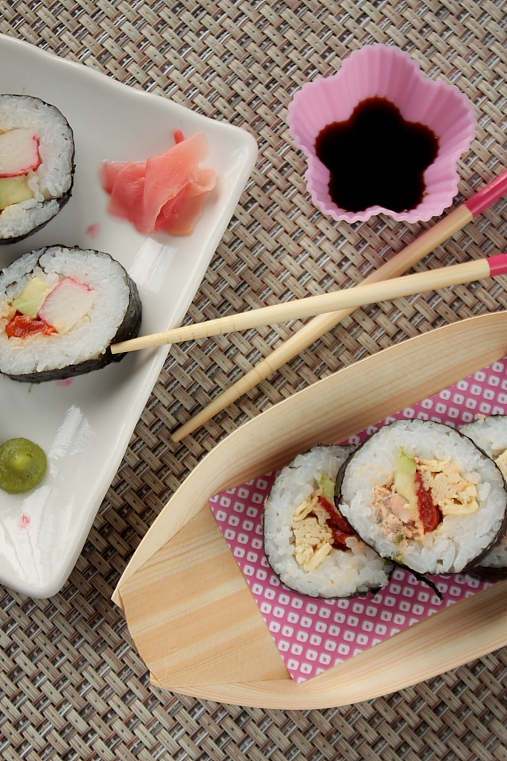 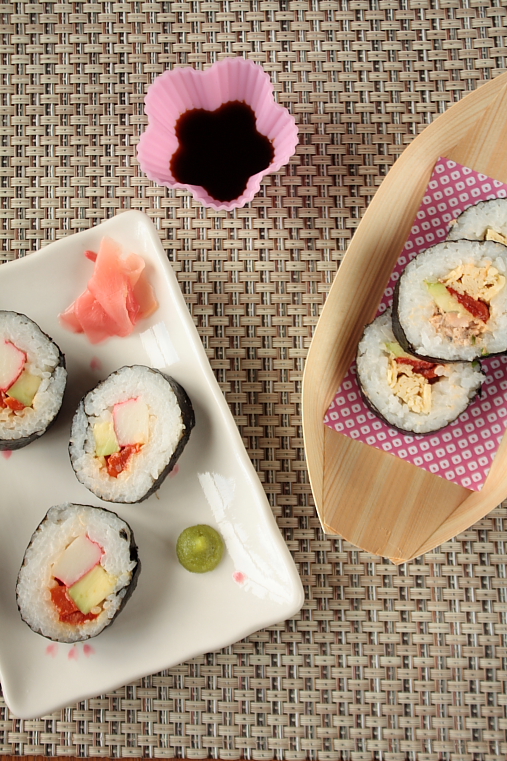 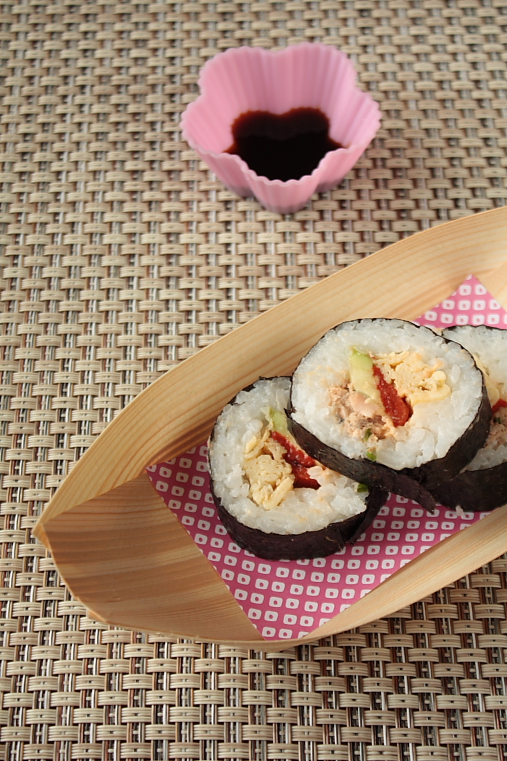 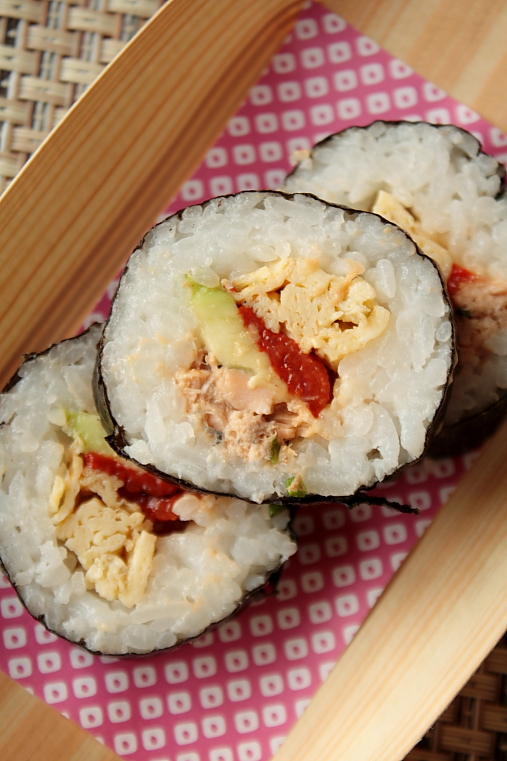 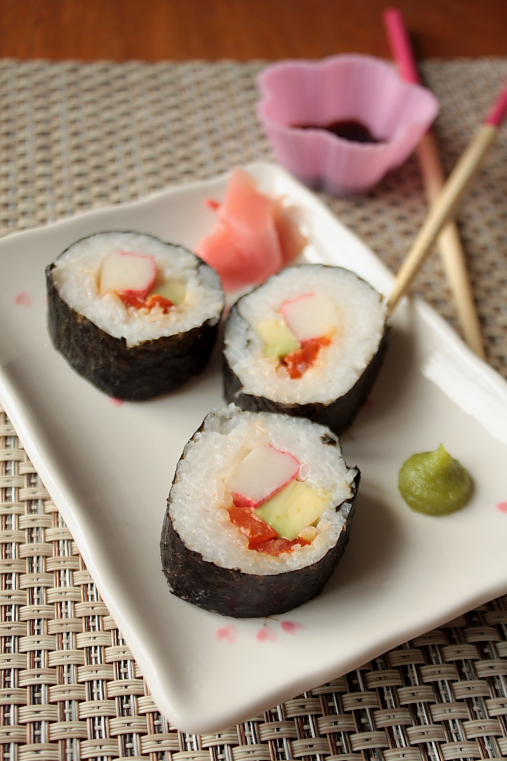 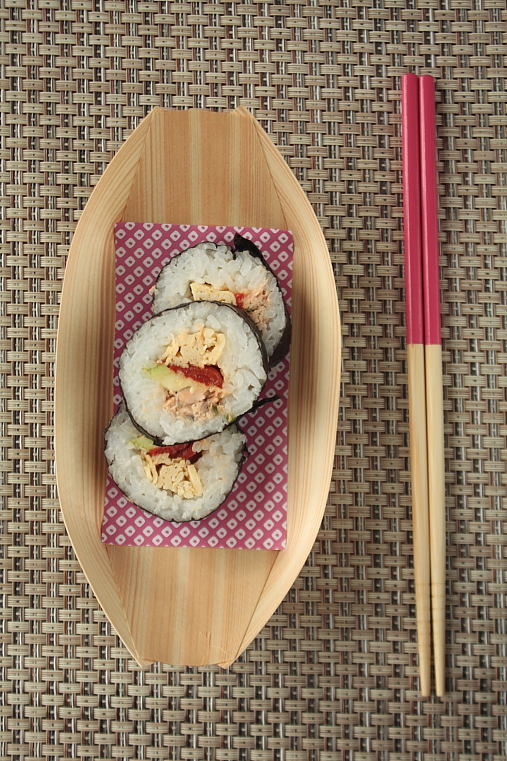 It’s been way too long since my last post! Seriously, time has been passing in a flash since coming back to London! New projects, new ventures and foremost new cooking classes. Some of you might know already that I’ve signed up for a cake decorating course and for a Japanese cookery class. The latter has totally enchanted me.

I may already know a fair bit about Japanese cuisine and be able to cook a few Japanese dishes, but it’s a whole other ballgame if you’re taught the basics all over again by a Japanese person. Suddenly you discover why a certain thing has to be done this way and not another, you learn about the importance of colours and the keys to beautiful food presentation. On top of all these fascinating tips and tricks, the classes are also just pure fun.

So in my first week of Japanese cookery I learnt how to make proper sushi – or rather maki rolls. The key is to cook the rice the right way so that it’s sticky but not too moist (detailed instructions in the recipe bit). We also discovered how to make Japanese omelette, you know the one that’s layered and quite sweet? It’s really dead simple. In fact, they make their omelette like a thin crêpe that they just roll up, then pour another crêpe and wrap the omelette roll in the new crêpe. You just continue until there is no more omelette mix left.

The actual assembly of the maki is pretty straightforward too. The nori (seaweed) leaf needs to lie shiny face down on a sushi matt (a bamboo matt that enables you to roll the sushi), then you just spread the rice evenly over the nori (leaving the top quarter without rice). In the end you assemble your fillings on the lower third of the rice and start rolling with the help of your sushi matt, pressing the roll very tightly. Voila, sushi made easy. Full recipe after the break – follow the rice instructions meticulously so that there’s no disappointment in the end. ★

To make the Sushi Rice:

Cover the rice in water and soak for 1 hour (minimun 30 minutes). Wash the rice in a strainer until the water runs clear.

Put the rice in a heavy pan and add the 520ml water. Cover and bring to a boil without stirring. This takes about 7-10 minutes. Once it boils, turn down the heat and cook for a further 5-10 minutes on a low heat. To check if the rice is done, take off the lid and look if there are little holes appearing on the surface. If you’re not sure, take a wooden spatula and lift the rice. If there’s still water or lots of moisture on the bottom, cook a bit further.

Once the rice is done put a clean tea towel on the pan to absorb the steam. Let it stand for 5 minutes, then mix the rice with a wooden spatula, lifting it from the bottom and trying not to break the grains.

Let the rice cool down (it should still be lukewarm when assembling the maki).

To make the Omelette:

Break the eggs into a bowl and mix with the sugar and salt. Heat a small pan on the hob. Pour some sunflower oil into the pan and spread it with help of a sheet of kitchen roll (which you’ll keep on the side to re-oil the pan between each layer of omelette).

Now pour a small bit of the egg mix into the pan, just enough to cover the surface of the pan. It should look like a thin crêpe. Cook for a few seconds, then roll it up on itself so it looks like a rolled cigar. Leave the omelette roll on the side of the pan whilst making the next layer: wipe the pan with the oiled kitchen roll, pour another thin layer of egg mix into the pan, cook and roll up the ready-rolled omelette in the new crêpe. Continue like this until you run out of egg mix. Set aside.

To make the chargrilled peppers:

Wash the peppers. If you have a gas hob: light the fire of your hob, put the peppers onto two hobs. It’s ok if the flames touch the peppers. Cover each pepper with a big pot or wok to keep the heat. Regularly turn the peppers. They should gradually blacken. They’re done once nearly the entire surface is black (mine took about 10 minutes to reach that stage).

If you don’t have a gas hob: Turn your oven on the highest temperature and roast the peppers on a baking tray. This will take longer than the gas hob version. If your oven has a grill function then it’s worth grilling the peppers underneath the grill until they’re black.

Wrap each pepper in kitchen roll and set aside for 10 minutes until cool enough to handle. Skin the peppers by pulling off the blackened skin. Cut out the seeds and cut into 1 cm thick slices. Set aside.

To prepare the salmon filling:

Drain the salmon and transfer into a bowl. Chop the chives and add to the salmon with 2 tablespoons of mayonnaise. Mix well and set aside.

To assemble the Maki:

Put a sheet of nori, shiny-side down, onto your sushi matt. Spread a layer of rice evenly over the nori, leaving the top quarter without rice. Spread your fillings on the lower third of the rice and start rolling with the help of your sushi matt, pressing the roll very tightly. Once you have your roll, cut it into 8 slices (you can cut more if they’re too thick).