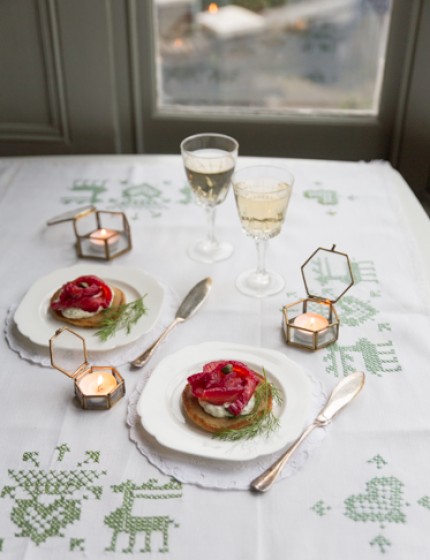 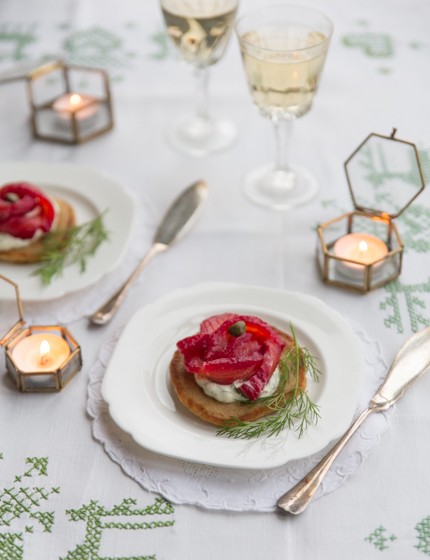 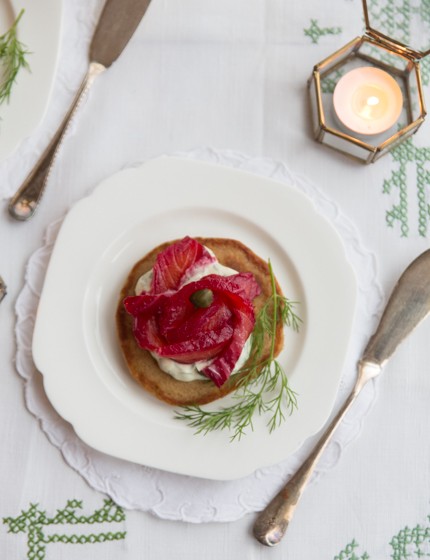 This is a really impressive festive starter – the vibrant colour of the beetroot stains the cured salmon with a beautiful red tint. Don’t be put off by the many ingredients, it’s actually super easy to prepare. Just make sure to start at least 2 days in advance, as the salmon will need time to cure. Also, make sure to use super fresh salmon of high quality.

Start 2 days ahead with the salmon:

Roughly grind the fennel seeds, coriander seeds and peppercorns in a pestle and mortar; you want the spices to have some texture. Put into a bowl and add the beetroot – make sure to squeeze out most of the moisture from the cooked beetroot, if using. Combine with the salt, sugar, vodka, lemon zest, dill and parsley.

Spread half the mixture over the top of salmon fillet and press down. Turn the fillet over and press the remaining mixture on the bottom of the fillet. Wrap the fillet tightly in cling film and place into a ceramic form. Place another ceramic form or a plate on top and weigh it down with weights, jars or even beer bottles. Leave in the fridge for 48 hours.

Unwrap the fish and scrape off the marinade with your fingers. Rinse the fish under cold running water to get rid of the salt and grains, then pat it dry with kitchen paper. Chill, wrapped in clingfilm, until ready to serve.

On the day of serving, prepare the dill cream by combining all the ingredients into a smooth cream.

Thinly slice the salmon. Then prepare the blinis: Combine the milk, flour, buckwheat flour, bicarbonate of soda and a pinch of salt in a bowl, then stir in the sour cream, melted butter and egg yolk.

Whisk the egg white to snow, fold through the dough.

Melt a knob of butter in a frying pan and drop in large spoonfuls of the batter. Cook for about 3 minutes or until the blinis start bubbling, then turn around and cook for another couple of minutes.

Top each blini with a dollop of dill cream followed by a few slices of beetroot-cured salmon. Decorate each portion with a little caper.