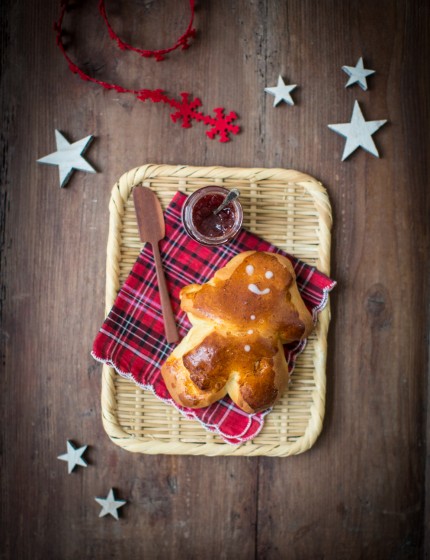 In December all the bakeries in Luxembourg sell these cute little men- and more recently women- shaped brioches, called a Boxemännchen! It’s the perfect breakfast treat around Christmas time, and it’s really not hard to make!

By the way, if you’re on Instagram you can find my very own hand-drawn Boxemännchen sticker in the GIFY section of your stories. So cute!

Put the milk and the butter in a saucepan over a medium heat until the butter has melted. Pour into a jug with 2 tbsp of sugar, stir and leave to cool for 10 minutes, until the liquid is lukewarm.

Crumble the yeast into the lukewarm milk mixture and stir to dissolve.

Put the flour into a large mixing bowl and make a well in the middle. Carefully pour the yeasty milk into the well so it doesn’t spill too far out of the well. Stir the yeast and the milk with a bit of flour from the sides of the well, so that you get a loose dough. Cover the bowl with a damp tea towel and leave to rise at room temperature for 15 minutes.

After 15 minutes, add the remaining sugar, salt and two eggs to the bowl and mix with the kneading attachment of an electric hand or stand mixer. Work into a smooth dough for 5 minutes. Cover the bowl with the tea towel and leave to rise at room temperature for 30 minutes so the dough doubles in size.

After 30 minutes, turn the dough out onto a floured surface and knock it back by briefly kneading it. Divide into 8 portions and shape each into an oval. Form a head at the top, then make a lenthgways slit at the bottom and pull apart the two sides to form the legs. Make a diagonal slit on each side to form the arms.

Put the Boxemännercher onto two baking trays lined with baking paper, leaving enough space between them, as they will rise in the oven. Cover each tray with a damp tea towel and leave to rise for 45 minutes at room temperature.

After 45 minutes, beat the egg yolk with the teaspoon of milk and delicately brush the tops of the brioche buns with the beaten egg glaze.

Bake the buns in the preheated oven for 20 minutes.

Put on a wire rack and leave to cool.

TIP: You can put little smiling faces on the Boxemännecher by making some icing (mixing a little icing sugar with a few drops of water) and painting eyes and a mouth on each one with the tip of a pointy knife.