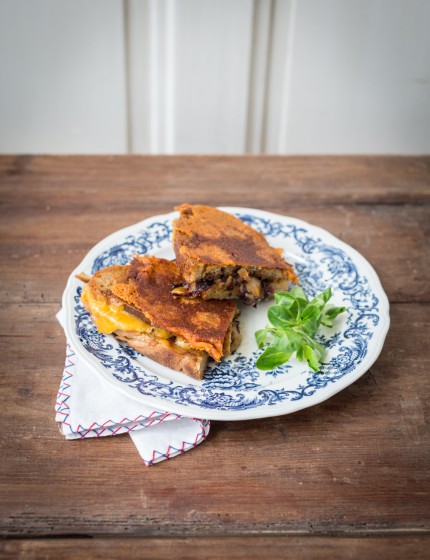 We all know the problem: you buy a nice loaf of bread and then the next day it’s no longer fresh. So you toast it, or freeze it for another time. But my favourite way to use up leftover bread is to make a grilled cheese sandwich. It is slightly decadent: a sandwich generously stuffed with cheese, then fried in heaps of butter… but it’s soooo good!  The perfect weekend brunch item – trust me, you’ll be making this time and time again!

If you prefer to make something sweet with leftover bread, I’d really recommend making my super yummy bread and butter pudding!

This recipe was created as part of my “Recipes for Staying Home” show, to flatten the curve during the 2020 Covid-19 outbreak. The concept is to inspire people to cook comfort dishes at home – I show basic recipes that can be adapted with all kinds of other ingredients. You can watch the episode here.

Start by making the balsamic onions: Peel and slice the onions. Melt the butter in a frying pan and fry the onions with a pinch of salt over a medium heat for about 10 minutes, stirring regularly, until they’re really soft.

Add the red wine and cook until absorbed.

Add the cassonnade and the balsamic vinegar and simmer for another couple of minutes until the onions are sticky and the liquid absorbed. Set the onions aside.

Spread some butter over the top of the two sandwiches. Heat a large frying pan and put both sandwiches, butter side down in the pan. Put a heavy saucepan or a plate with cans on top of the bread slices to weigh down the sandwiches. Fry on a low heat for about 5 minutes.

Once the bottom is nicely browned, remove the weight from the top and spread some butter over the unbuttered sandwich side. Turn the sandwiches over, weigh down again and fry for another 5 minutes or until the cheese is melted.

Serve with a green salad for some good conscience…