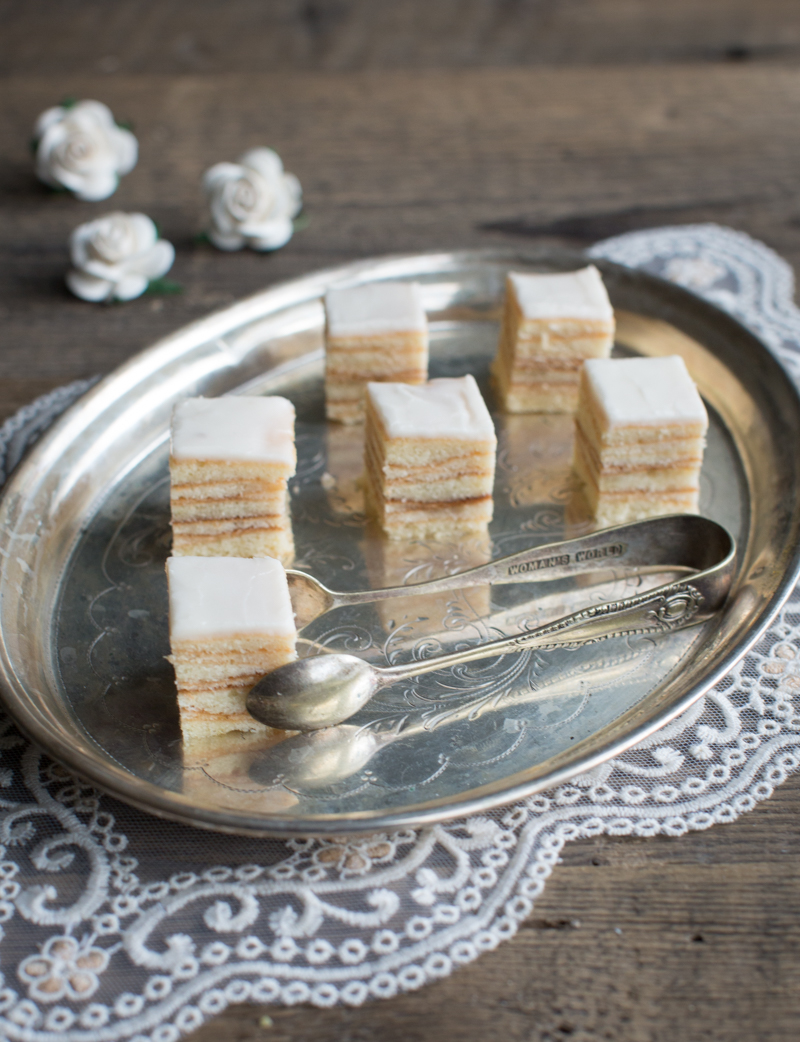 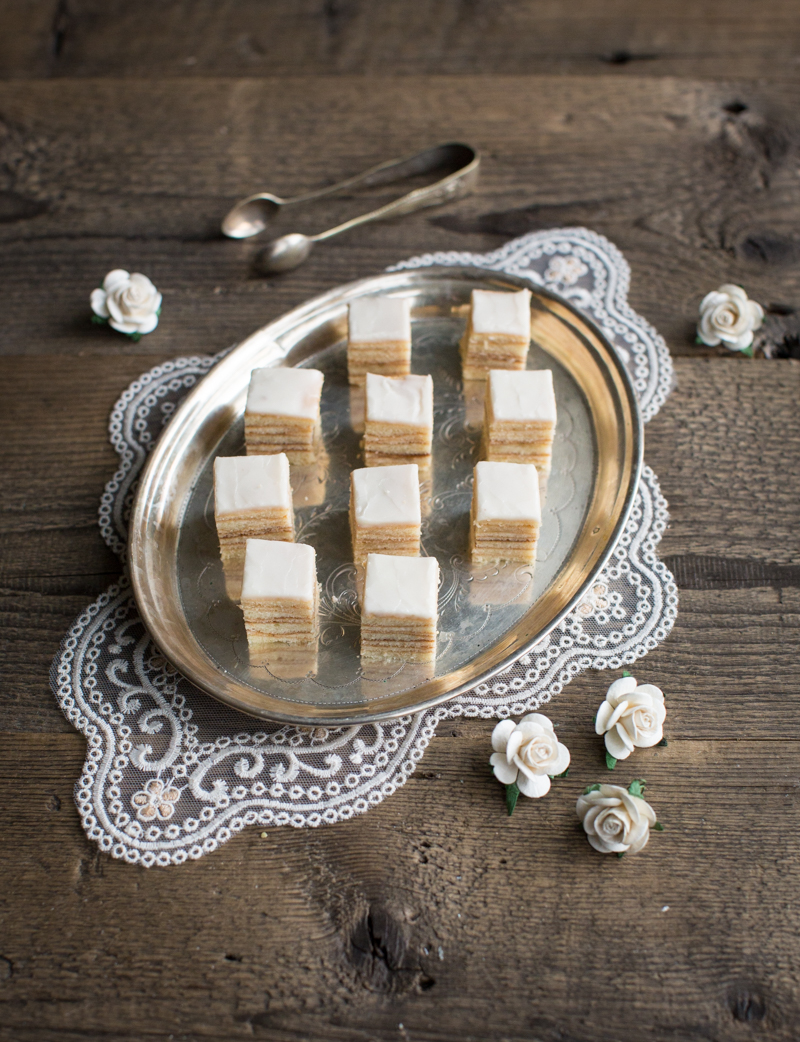 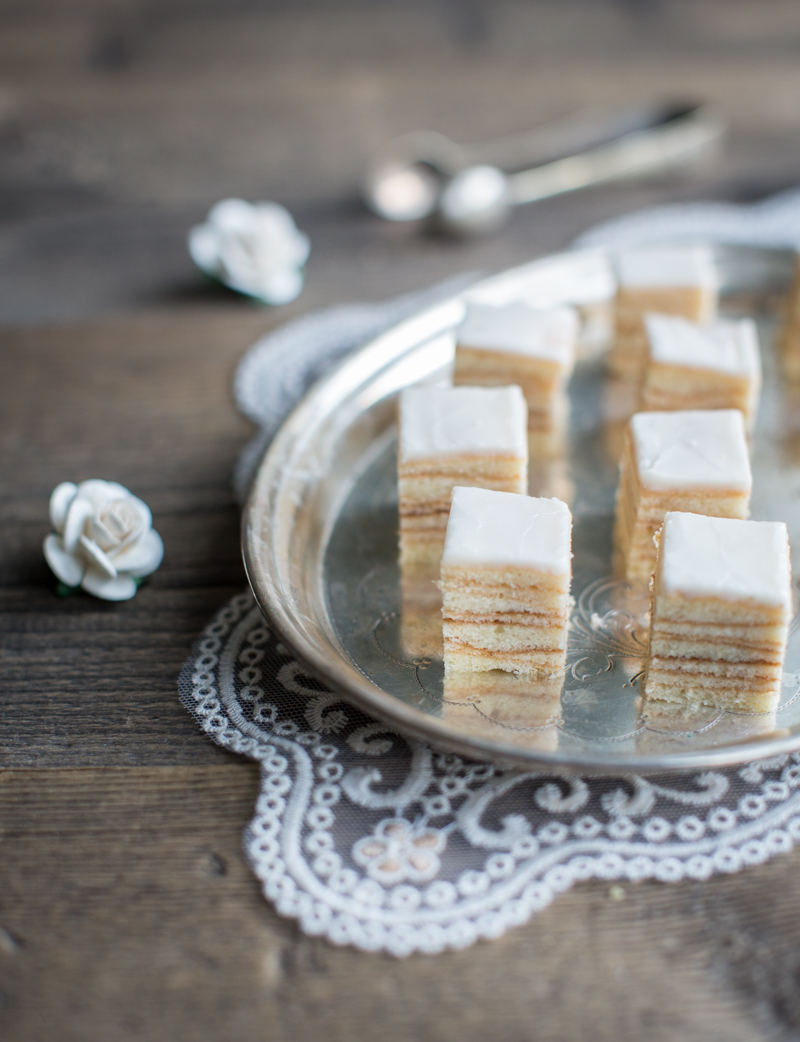 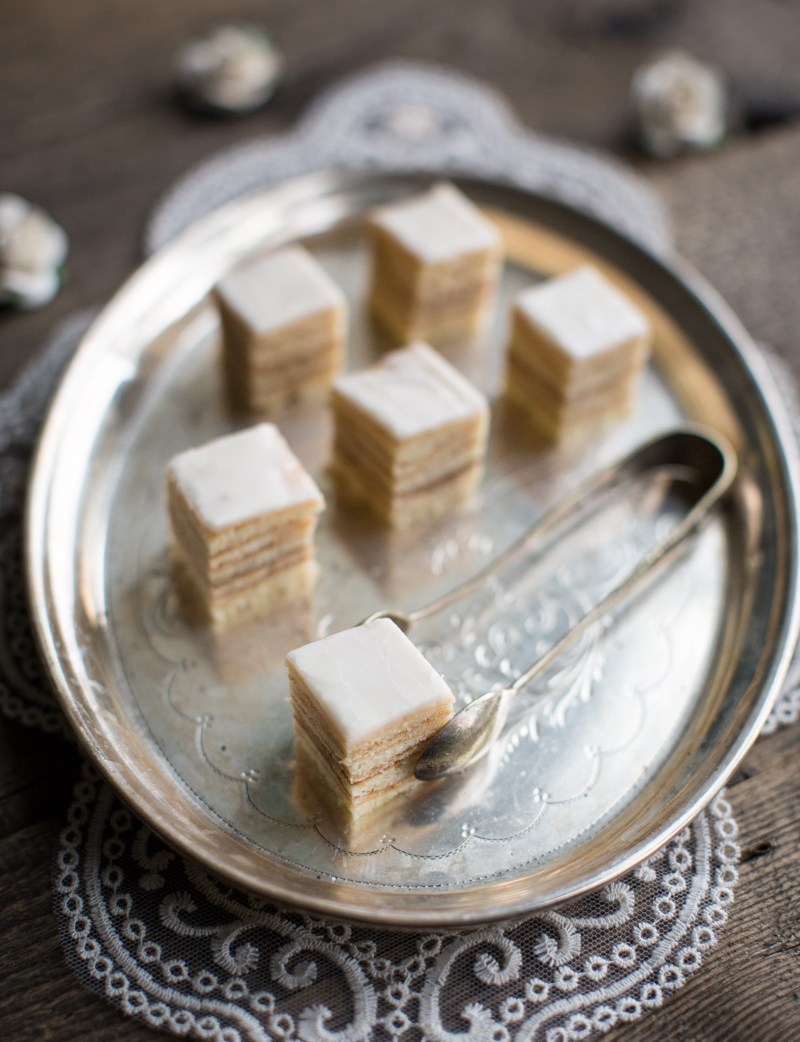 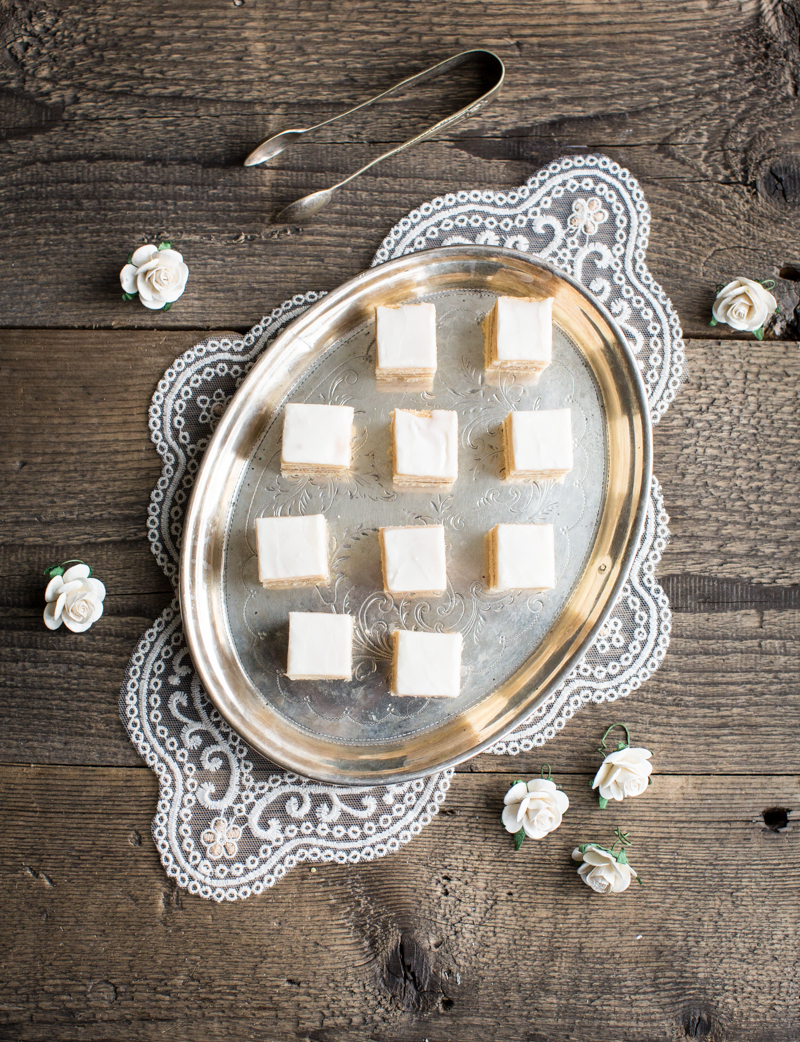 Bamkuch is reserved for life’s major occasions, and it has a special place in every Luxembourger’s heart. I had a big one for my first Holy Communion and it is the country’s most popular wedding cake. Its name translates as ‘tree cake’ because, when the classic log-shaped version is cut open, you see the baked rings like the rings of a tree trunk.

Making Bamkuch the traditional way at home is virtually impossible, unless you happen to have a horizontal spit in your kitchen: the cake is made by drizzling batter onto the spinning spit, grilling layer after layer.

There are two ways to make my Bamkuch in a normal oven: you can grill the cake layers under the oven grill, but I find it easier to control the baking process by baking the individual layers first before adding the characteristic grill marks with the help of a blow torch.

I serve my Bamkuch in neat square-shaped bites, but if you want to do it the traditional way, cut the cake into very thin, delicate slices.

You can watch me make Bamkuch in this episode of my show.

If you want to read the recipe in Luxembourgish, click here.

Grease a 25 x 20cm cake tin and line the base with baking paper.

Separate 4 eggs, putting the whites into a large, and the yolks into a small bowl.

Add a pinch of salt to the egg whites and beat until stiff.

In a large bowl, beat the butter, sugar and vanilla sugar. Add the 4 egg yolks and beat, then add the remaining two whole eggs and beat again. Add the rum and beat some more.

In a separate bowl, mix the flour, cornstarch and baking powder. Gradually add the flour mix to the butter mix, beating between additions.

Fold in the stiff egg whites with a spatula until you get an even, aerated batter.

Spread a thin, even layer of batter onto the base of the cake tin and bake the batter for 4 minutes until the it has set.

Meanwhile, put 1½ tbsp sugar, 75ml water and 1½ tbsp rum into a small saucepan and heat until all the sugar has dissolved.

Heat up the apricot jam in a separate saucepan so it becomes runny.

Take the cake tin out of the oven and char the surface with a blowtorch. Brush the surface with some apricot jam, then add another thin, even layer of batter. Bake for another 4 minutes until it has set.

Once the second layer is baked, char the surface again with the blowtorch, then drizzle some of the rum syrup over the cake with a small spoon – this needs to be done evenly, while making sure not to pour too much liquid over the cake.

Spread another layer of batter on top of the cake, pop into the oven for 4 minutes, char with the blowtorch and brush with apricot jam. Repeat this process until all the dough is used up – alternating between apricot jam and syrup layers.

Once you get to the last layer, bake this one for 10 minutes to make sure the cake is fully baked. Take out of the oven, char with the blowtorch but don’t add any syrup or apricot jam this time.

Leave the cake to cool in its tin for 15 minutes. Turn out onto a wire rack and leave to cool completely.

Once the cake is cool, prepare the icing by mixing all the ingredients together in a small bowl. Spread over the top of the cake and leave to set.

Once the icing has set, cut the cake into squares and serve.

This cake keeps wrapped in foil for 4 days.

TIP:
If you want to use the grill method instead of the blowtorch one, preheat your oven grill to high without turning on the actual oven. Grill each cake layer just below the grill for about 3 minutes until the top has browned. Alternate between apricot jam and rum syrup, just like in the recipe. At the end, heat the oven to 180°C and bake the cake for 10-15 minutes to ensure it is fully baked.