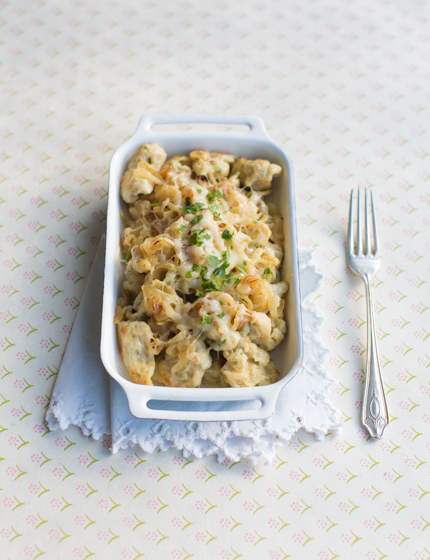 I will never forget my first encounter with Käsespätzle in Munich: it was a humongous plate filled with buttery Spätzle oozing with melted cheese and soft onions. It could have fed the entire table but I bravely fought my way through it – sooooo good! I decided to make my version with Kniddelen, traditional Luxembourg dumplings. Even though this recipe is super simple to make, you’ll need to plan in some time, as the Kniddelen need to be cooked in batches. I’d suggest cooking the Kniddelen in advance, or using leftover Kniddelen, frying them off and sticking them in the oven half an hour before you plan to eat them.

I made these Kniddelen in the second Berlin episode of my show, you can watch it here.

Peel and halve the onions, then cut into thin slices. Melt 40g butter in a frying pan, add the sliced onions, star anise and a pinch of salt and gently fry for 20 minutes until meltingly soft and brown, stirring regularly. Remove the star anise and set aside when done.

Meanwhile, prepare the dumpling batter: Put the flour into a large bowl, add the salt, parsley and eggs and knead with an electric whisk fitted with a kneading attachment. Gradually add the milk, whisking between each addition. Knead until you get a sticky, shiny batter.

Fill a large saucepan with boiling water and add a generous pinch of salt. Grab a portion of batter with the help of two teaspoons, shaping a little dumpling, and dip the teaspoons into the boiling water so the dumpling slides off into the saucepan. Repeat until the bottom of the saucepan is covered with dumplings. Keep boiling until the dumplings float to the surface – that’s when they’re ready. Remove from the water with a slotted spoon and put into a bowl. Repeat the process until all the batter is used up.

Bake the Käskniddle for 5 minutes until the cheese has melted and turned golden.