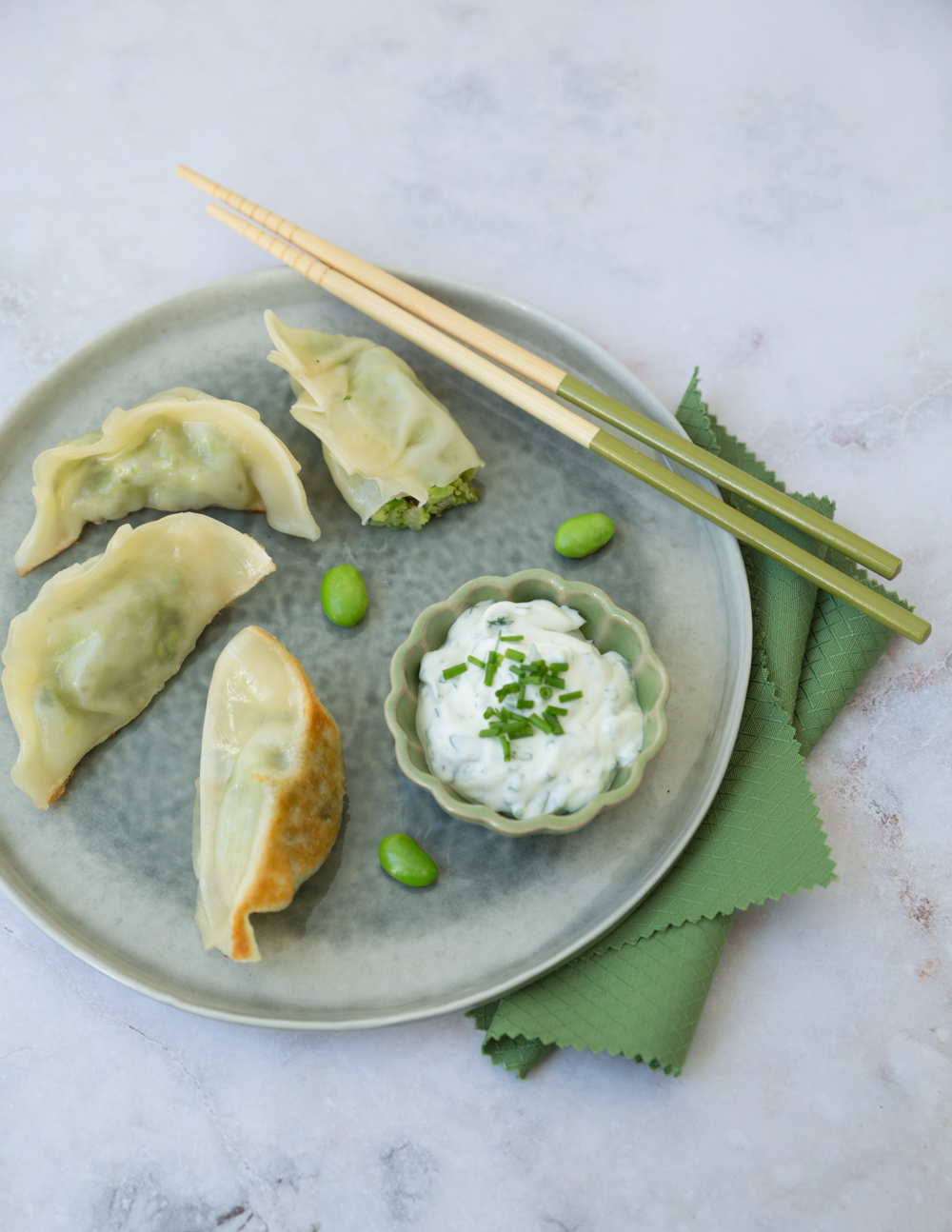 I really love dumplings and I’ve been playing with fun fillings for years. One of my favourite filling is with Judd mat Gaardebounen (smoked pork with broad beans), traditional Luxembourgish flavours wrapped up in a dumpling. So I wanted to film my Judd mat Gaardebounen dumplings in my Staycation show – but I couldn’t get hold of any Judd at this time of year! The smoked meat is predominantly used in heavy autumnal winter dishes such as choucroute, so no way you can get hold of it in summer…

So instead I decided to make a vegetarian version of my favourite dumpling. I’m mixing broad beans and edamame, and seasoning them with Bounekräitchen (summer savoury). It tastes very Luxembourgish and is vegetarian. You could serve these dumplings with a simple dollop of mustard or soy sauce, but I like to have them with a sour cream and herb dip. So yum!

This is a recipe from my cookbook ‘Flavours of Home’. Watch me make these dumplings here (and see how the folding goes).

Peel and finely chop the onion. Melt the butter in a saucepan and fry the onion for 5 minutes until soft. Set aside.

Meanwhile, put the broad beans and edamame in a saucepan of boiling salted water. Bring back to the boil and drain after 1 minute of boiling. Rinse under a cold running tap to cool.

Put a heaped teaspoon of the filling in the middle of a dumpling wrapper. Dip your index finger into a small bowl of water, and moisten the edges of the wrapper wrapper, so that you get a wet circle around the filling.

To make potstickers: Put the vegetable oil into a frying pan. Sit the dumplings in the pan and pour enough boiling water into the pan so it reaches up to half the height of the dumplings. Cover with a lid and cook on a high heat. Leave to boil until nearly all the liquid has evaporated. Uncover, reduce the heat to medium and cook for a little longer until the bottoms of the dumplings are crispy.

To make the dip, mix the sour cream and chopped herbs in a bowl. Season with salt and pepper.

Serve the hot dumplings with the dipping sauce.

TIPS:
• If you prefer to steam the dumplings, you can do so for 8 minutes at 100°C.
• These dumplings are also great served with a dollop of Luxembourgish mustard or soy sauce as dipping sauce.