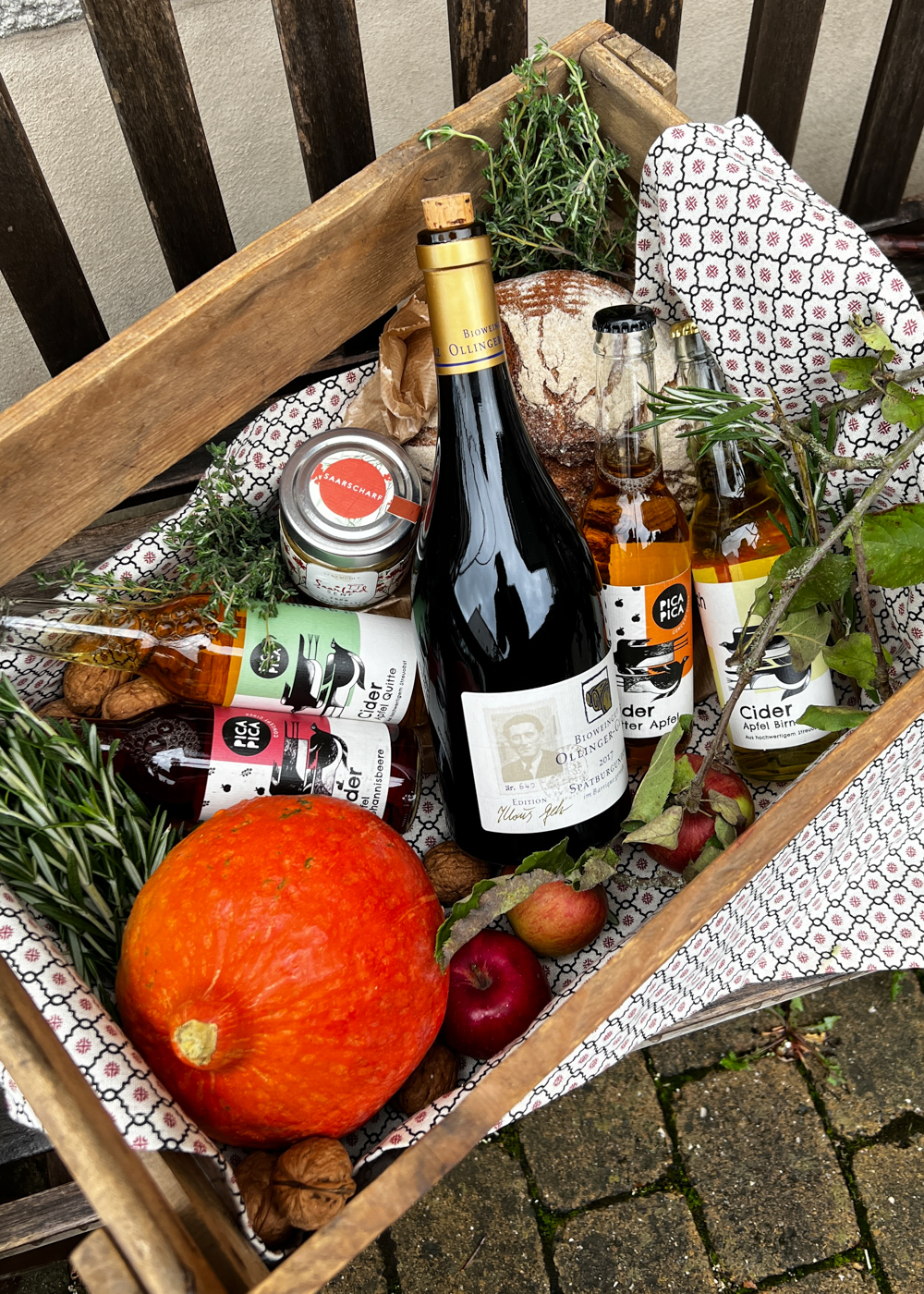 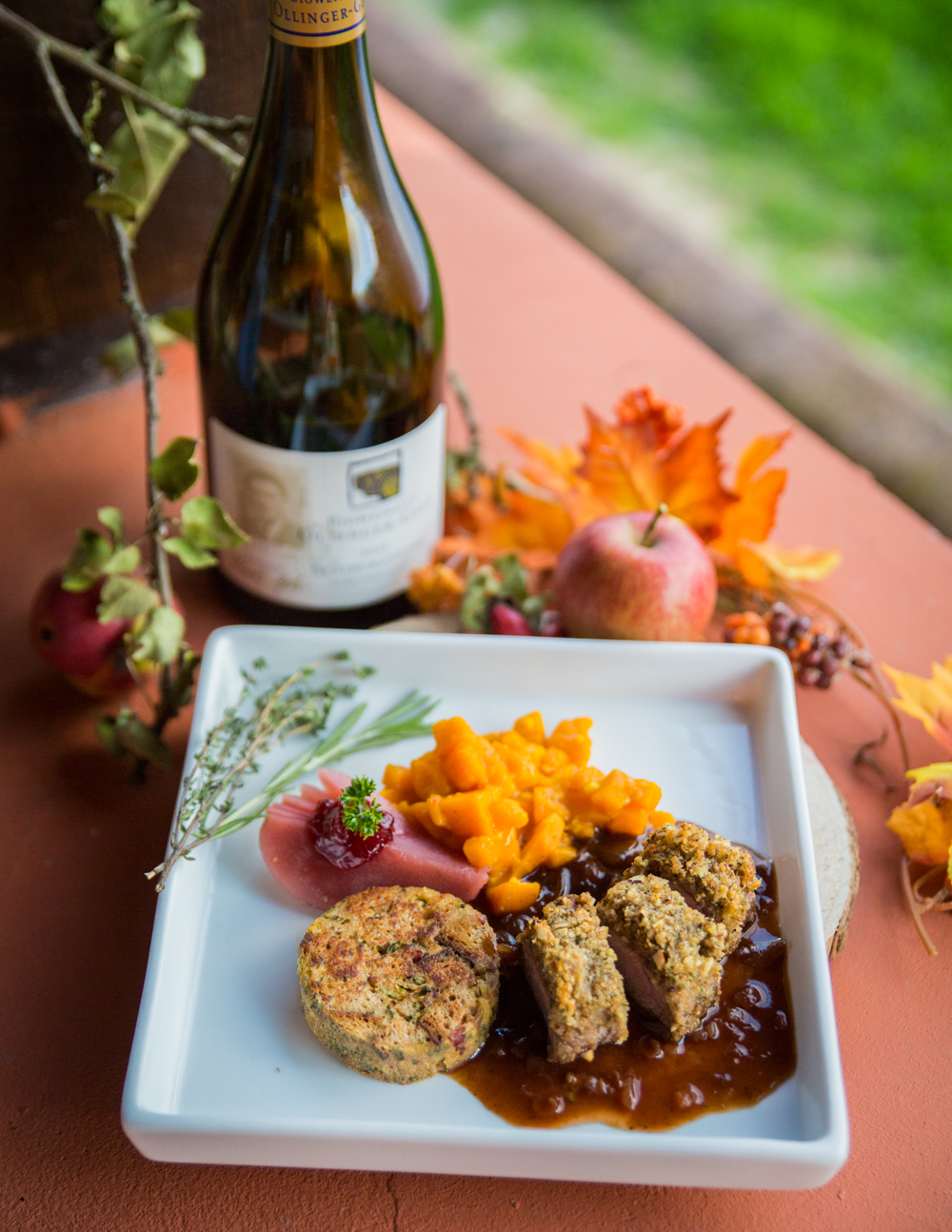 I love cooking with regional and seasonal ingredients, so when Urlaub Saarland asked me to join them in discovering Saarland products and cook with these, I was immediately game! In our ‘Dibbe Duo’ project, I’m visting Saarland over three months – each month I’m being introduced to two local producers to gather ingredients that I’ll bring to a local chef. Together we then proceed to develop a new recipe.

This October’s Dibbe Duo took me to Bioweingut Ollinger-Gelz in Perl, a family winery that’s been making wine for 150 years. They converted their production to organic wines in 2004, and you find some excellent pinot noir, auxerrois, riesling and other regional varieties here. I picked up a bottle of Pinot Noir for my Dibbe Duo Box, which also held some local cider from Pica Pica, hokkaido pumpkin, walnuts, regional mustard and herbs.

I then sat down with chef Christian Heinsdorf from the Taverne Römische Villa Borg – a restaurant set in a reconstructed Roman villa that also serves as a museum. Christian is an avid hunter, so he suggested we cook some seasonal venison with a nut crust, served with a pumpkin cider ragout and a delicious sauce made with Ollinger-Gelz’s pinot noir. And, to add to it, we’re using up some stale bread and turning it into a delicious ‘Serviettenknödel’ – a fried German dumpling which works perfectly in this delicious autumnal dish.

Start with the crust: Finely chop the walnuts and hazelnuts and put in a bowl with the softened butter. Finely chop the thyme and rosemary and add to the butter with the breadcrumbs and the mustard. Season with salt and pepper, then knead well to get an even mixture. Shape into a sausage approx. 5 cm thick, wrap in cling film and put in the fridge to firm up.

For the pumpkin ragout: peel the pumpkin, deseed and cut into 1 cm cubes. Heat a tablespoon of oil in a saucepan and fry the pumpkin with a pinch of sugar for a couple of minutes. Deglaze with the cider, then reduce the liquid for 3 minutes. Add the stock and simmer for about 5-8 minutes, until the pumpkin is cooked through but still holds its shape. Season to taste with sambal olek, salt, pepper and nutmeg. Set aside.

Cut the venison into 4 portions, then season with salt and pepper. Heat 1 tbsp of oil and 30g butter in a large frying pan, add the meat and the rosemary sprigs and brown the meat on all sides. Remove the meat and put it on a baking tray.

Make the sauce: Fry the chopped onion for 3 minutes in the pan used for the meat. Add the pinot noir and cook for a minute, then add the game jus and the thyme and leave to simmer for about 15 minutes. Remove the thyme and let the jus reduce further (to approx. 300ml). Cut the butter into cubes and gradually whisk into the sauce to thicken before serving.

While the sauce is cooking, make the dumplings: cut the bread into 2cm cubes and put in a bowl. Peel and finely chop the onion. Heat a tablespoon of vegetable oil in a frying pan and fry the bacon with the onion for 5 minutes. Add the eggs to the bread in the bowl and pour over the hot milk, stir to combine. Stir through the bacon and onions, season with salt and pepper and leave to soak for 5 minutes.

Put the dumpling mixture onto piece of of cling film and roll into a sausage of about 5 cm thickness, sealing the ends tightly. Wrap the sausage in a piece of foil and seal tightly. Place the sausage in a pan of simmering water and cook for about 30 minutes. Unwrap the boiled sausage, cut into 1 ½ cm thick slices. Melt 50g butter in a large frying pan and fry the dumpling disks on each side until browned and crispy.

Finish the meat: Preheat the oven to 170°C fan with the gill on. Take the nut crust out of the fridge and cut into 1 cm slices. Place the nut crust slices on the browned venison, so that they slightly overlap. Grill the meat for 5 minutes in the preheated oven, so that the crust is golden.

Cut the meat into slices and arrange on plates with some pumpkin ragout, dumplings, a pear half stuffed with cranberry jam and drizzle over with sauce.