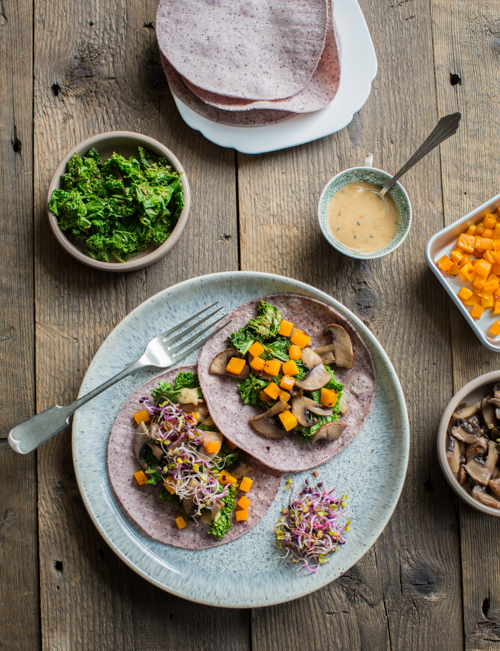 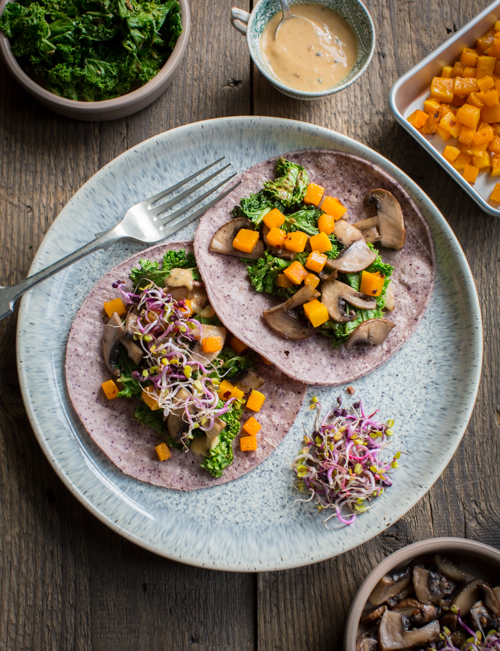 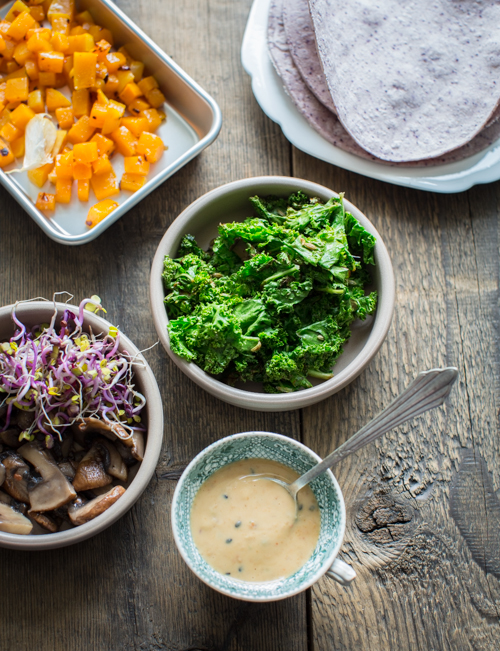 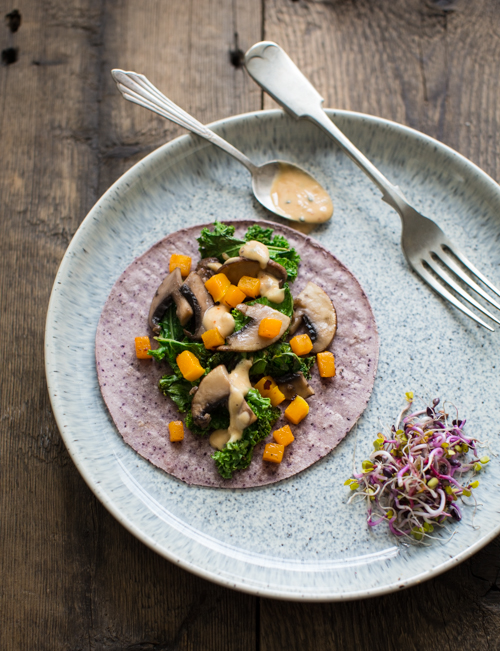 I can bang on quite a bit about why autumn is my favourite season – from the changing colours of the leaves to long autumn walks followed cozy evenings in the pub, autumn is simply awesome! But the best about the season is the abundance of really exciting vegetables!

I’ve been cooking quite a bit of vegetarian food lately, it just makes me really happy to work with seasonal vegetables and get the best out of them. I think it might be due to me suffering from a slight ‘meat hangover’ caused by my two-months chef training course at Ducasse in Paris (there was SO much meat at Ducasse). So, focusing on vegetables is my thing now!

These autumn tacos were one of the first things I cooked when I set foot again in London after Paris. I was so inspired by the veg selection at my local greengrocers, and I still had some blue corn tacos in my freezer that were screaming to be used up. There was also a jar of spicy peanut butter from my trip to NYC that has still not been opened… So I threw them all together and came up with these lovely autumn tacos. They’re super yum, and actually vegan! I only realized that after devouring 4 entire tacos – they’re soooo good! I hope you like them too!

Note: If you live in Luxembourg then I doubt you can find actual corn tacos (which is a real shame, as they taste more nutty than wheat tacos). Just replace them with wheat tacos.

Cut the butternut squash into cubes of approx. ½ cm. Put into a baking dish, drizzle with 2 tbsp olive oil, the chili flakes and season with a bit of salt. Bash the garlic cloves and leave ¼ clove aside for the mushrooms later. Add the garlic cloves to the squash and bake in the preheated oven for 20mins until soft.

Meanwhile, quarter the mushrooms and cut into slices. Put 1 tbsp olive oil into a frying pan and fry the mushrooms until soft. Add the chopped garlic and season with salt, fry for another minute, then set aside.

Strip the kale leaves from the stalks. Heat the remaining tablespoon of olive oil in the same frying pan used for the mushrooms and fry the kale with the fennel seeds and soy sauce for a few minutes until soft. Remove and set aside.

Once the squash is baked, remove the skin from the baked garlic cloves, chop then crush to a puree with the flat side of your knife’s blade. Mix the garlic paste with the butternut squash.

Toast the corn tacos in a hot frying pan in batches, toasting them for a minute or so on each side until the tacos start forming air bubbles inside, are fragrant and slightly toasted.

Mix the peanut butter with 2 tbsp water so you get a runny dressing. Season with salt and pepper and chili flakes(if needed).

Put a bit of kale onto each toasted taco, top with mushrooms and butternut squash cubes. Drizzle with peanut butter and sprinkle with cress.