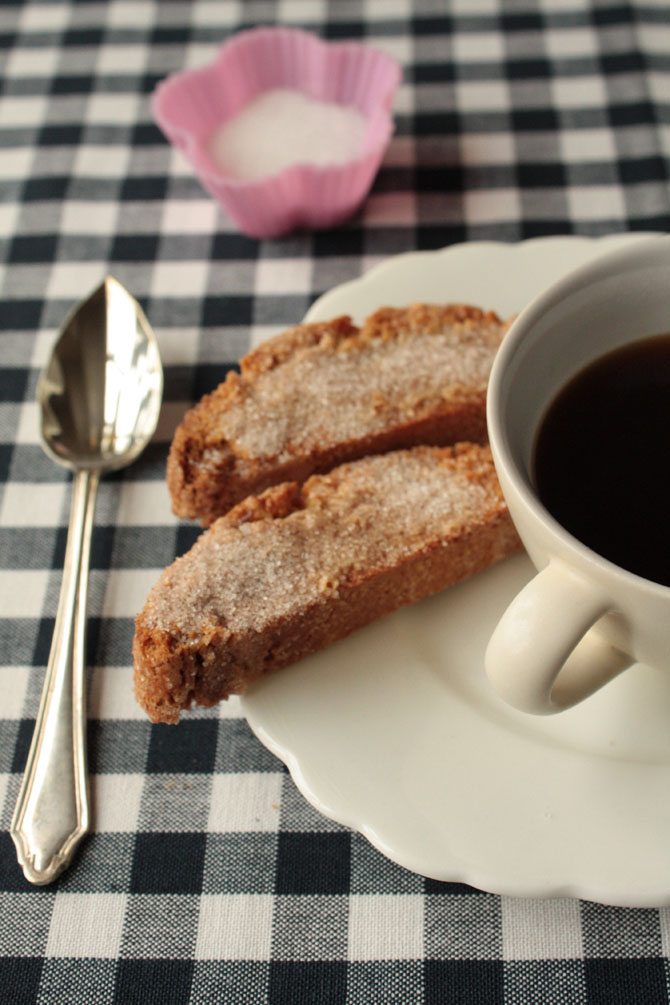 Hello, my name is Anne and I’m a cinnamon addict.

Cinnamon, Zimt, Cannelle, Kanéil… Those who know me are well aware of my tendency to put cinnamon into everything. My morning porridge, my coffee, my cocktails and last night I made a chicken tagine with 3 cinnamon sticks in it too! I’ve been working on taming this addiction ever since I put some cinnamon into these Mexican cornflour cheese patties and it turned out – well let’s say, umm – interesting… Nevertheless, cinnamon is just unbeatable. Why do they always portray us all as chocaholics and never, ever have the media thought about claiming cinnamon as an addictive substance…

My cinnamon addiction goes back a long time. I think the first time I ever really became aware of that flavour was when our American neighbour Rita (was that her name?) brought over a slice of carrot cake. I had never ever tasted anything like that and I was instantly hooked. I must have tasted it in Christmas cookies before, but this somehow is my earliest cinnamon memory.

So, ever since I found out that cinnamon was in fact the bark of a tree, I’ve been dreaming, longing, hell even fantasizing about one day walking through a cinnamon forest! Yes, imagine that, a whole forest made up of cinnamon trees! Boy, that must be heaven! I never really believed it existed, but the other day a friend from Vietnam told me that he grew up with this cinnamon tree in his garden, and that they would always lick the bark for cinnamon flavour! How cool is that?! The closest I have ever come to a cinnamon forest was in a shopping mall in the US, where this place called Cinnabon (or something like that) filled the whole food court with an artificial cinnamon smell… Picture trees and a breeze and welcome to the 21st century artificial American cinnamon environment.

Anyway. Over to the biscotti!

I came across these on Joy the Baker’s blog. Joy makes everything seem fabulous. Popcorn, peanut butter an bacon cookies, hell even cheese graters! So when I came across this post I stopped for a moment and gave it a second thought..

It had never occured to me to make biscotti – those dry, hard cookies that could be anything from a couple of days to a few years old. But Joy made it sound like they were the most marvellous thing in the world, so I thought ‘what the heck? Maybe she’s right! Maybe there’s a whole biscotti world out there waiting to be discovered’. And as long as it has cinnamon in it, it has to be great. So I gave it a go. And boy, did I not look back to those non-biscotti days. Abslolutely M.A.R.V.E.L.L.O.U.S! Especially when dipped into some decent coffee. They instantly soak up the liquid and become a moist sponge exploding with cinnamon and coffee. It’s simply great. Really. Try it! Go on, try it… You know you want to!

Whisk together flour, cinnamon, baking powder and salt, set aside.

In another bowl whisk the butter and sugar until light and fluffy. Beat in the egg and egg yolk, as well as the vanilla extract. Now add the flour mix all at once and mix until you get a nice dough.

In another bowl mix the sugar and cinnamon for the topping and set aside.

Divide the dough into two portions. Shape each portion into a loaf, around 22cm long and about 4 cm wide. Brush with the egg white and sprinkle generously with cinnamon sugar.

Bake both loaves for 20 mins. Then, rotate the baking trays for even baking and bake for another 20-25 mins.

Take the loaves out of the oven and let them cool down a bit. Now, you make the actual biscottis by baking them a second time!

Cut slices of about 1 centimeter off the loaves and lay each biscotti slice onto the baking sheet (facing sliced-side up). Brush with remaining egg white and sprinkle with more cinnamon sugar. Bake for another 10-15 minutes until nicely golden.

They keep for about a week, and are best served with a hot drink so you can dunk them.