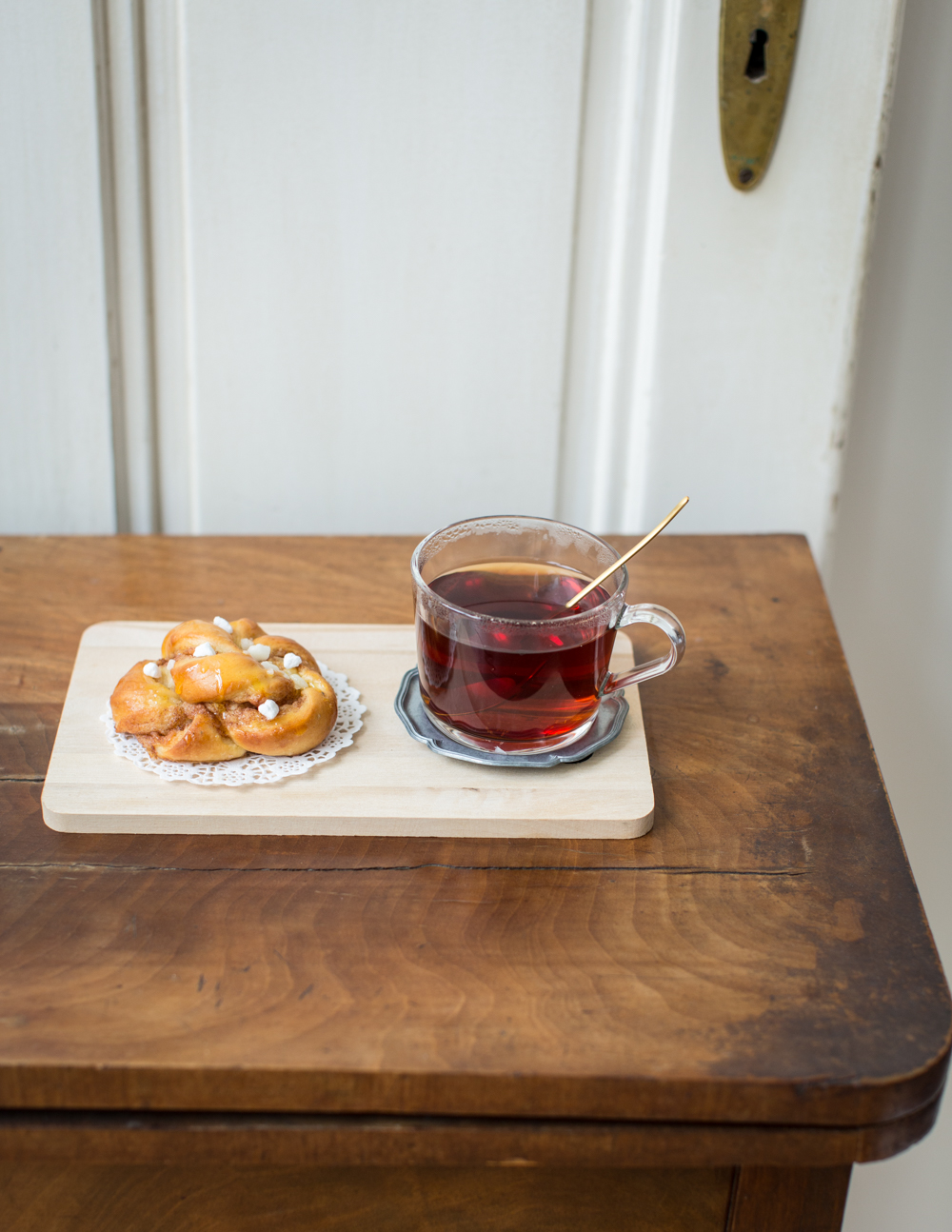 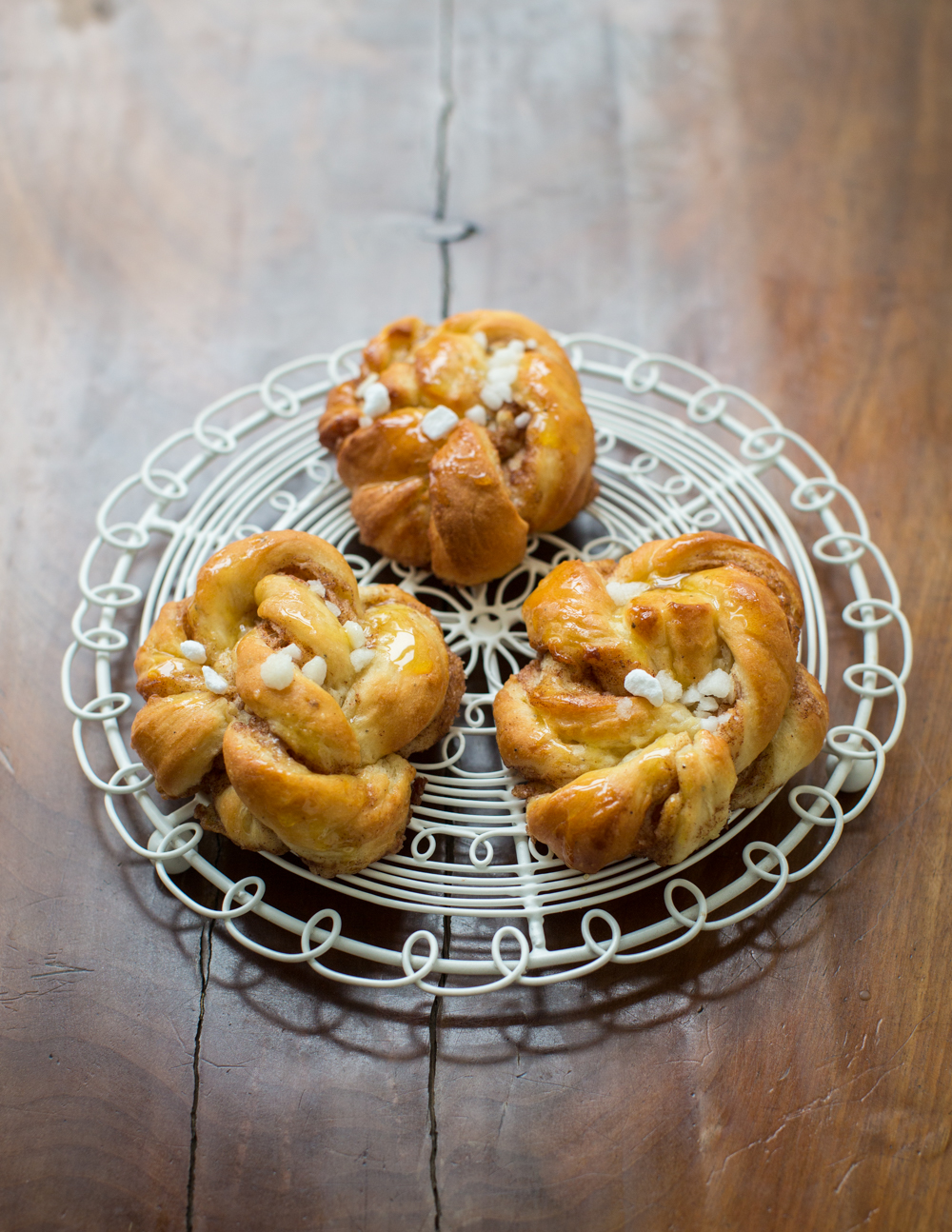 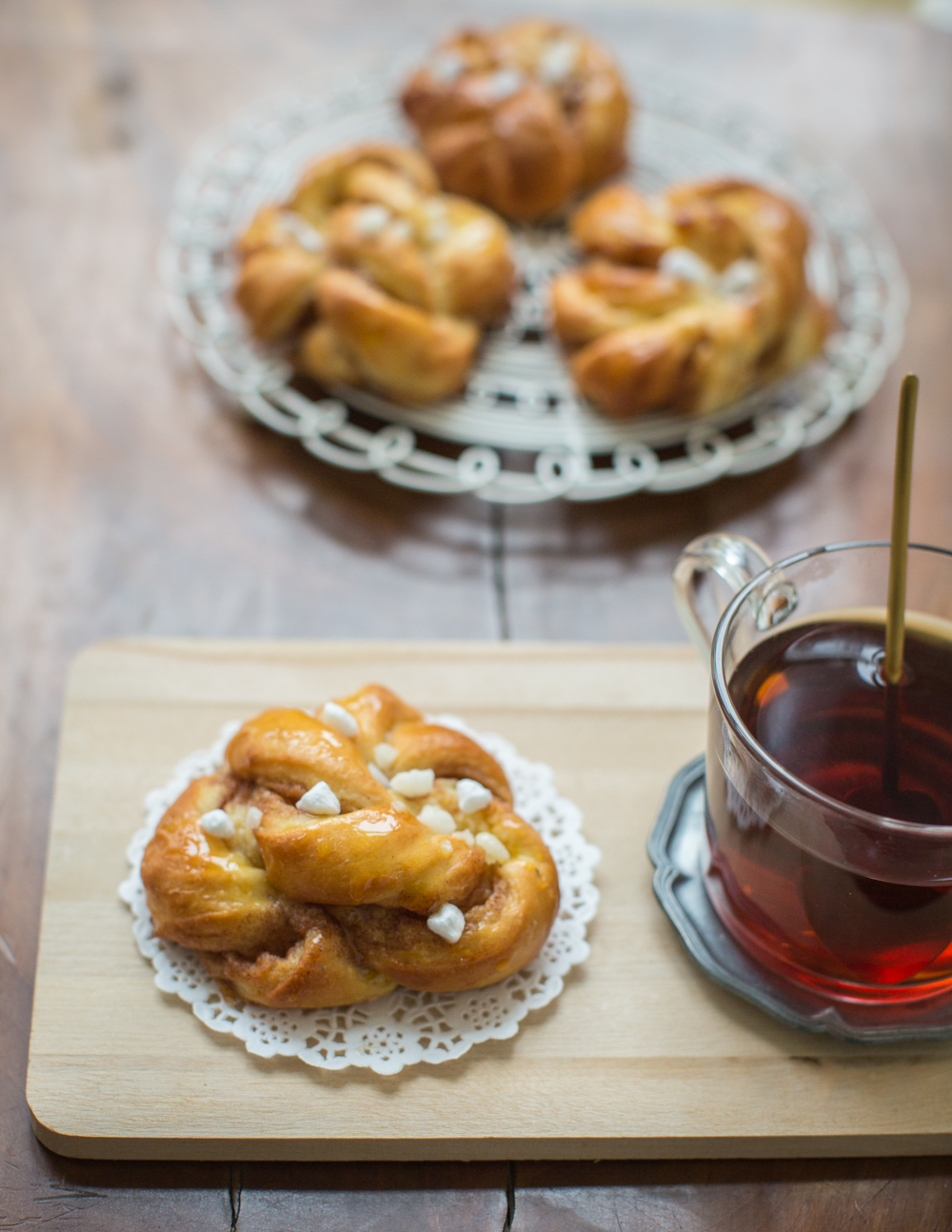 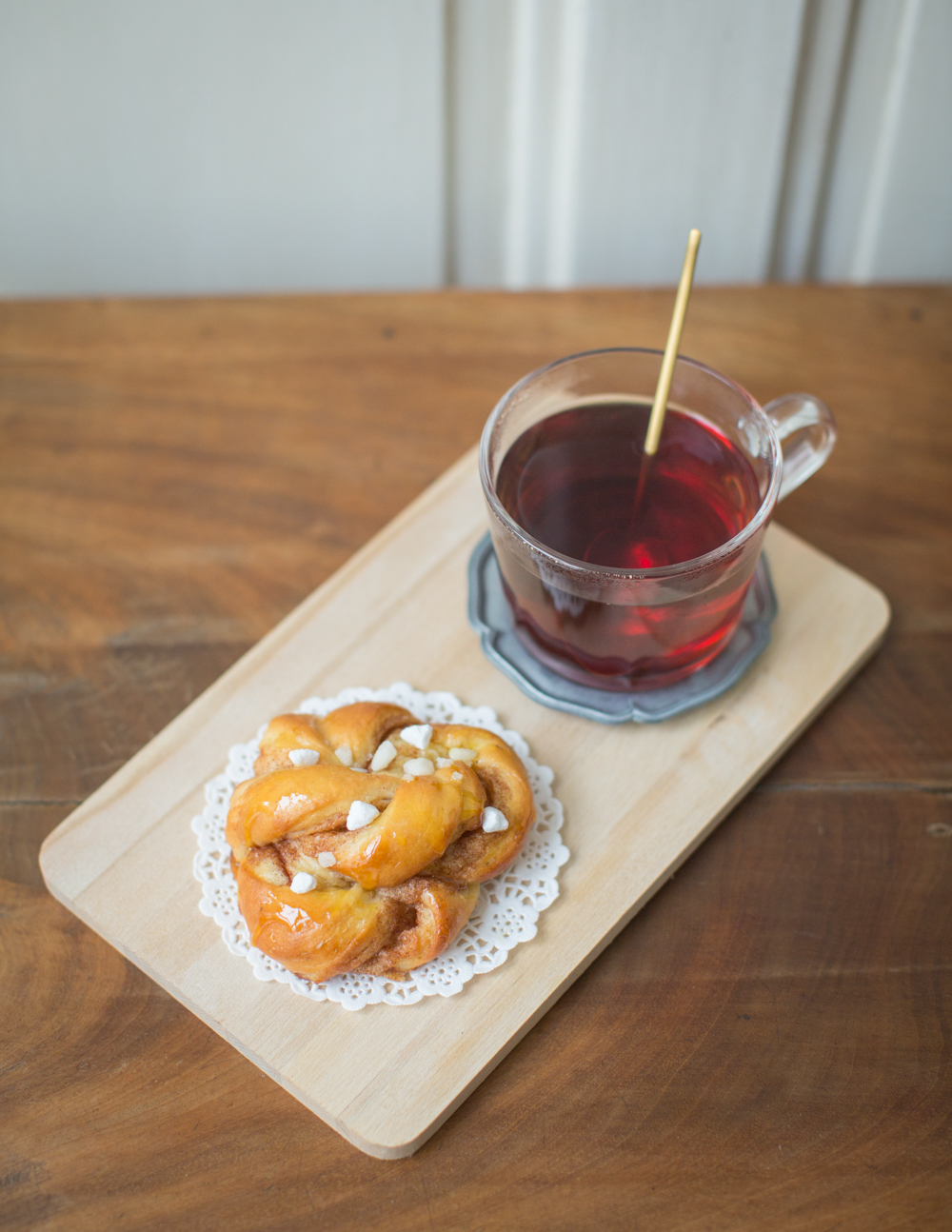 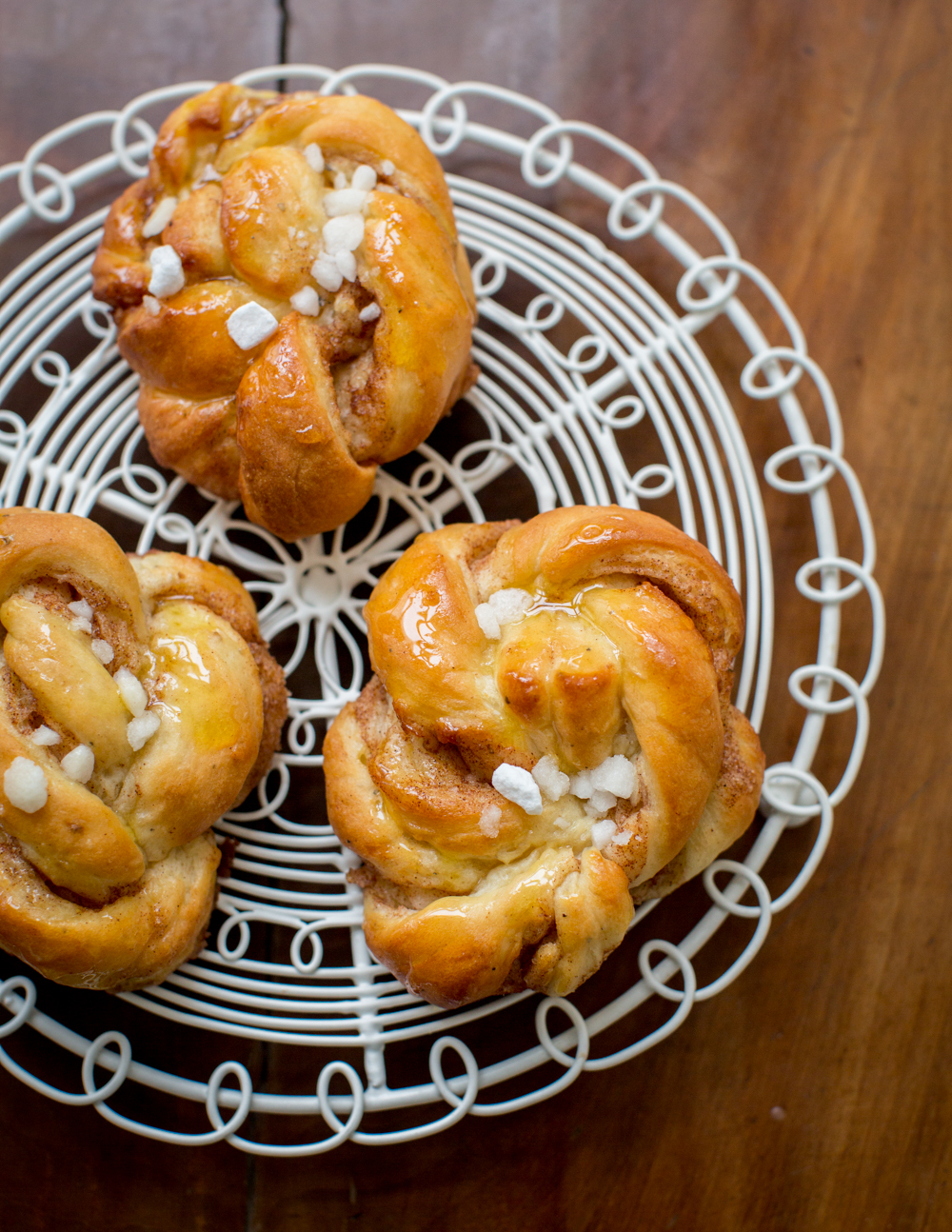 A few years ago, Scandinavian bakeries started mushrooming in London, popping up in trendy neighbourhoods and drawing people in with their cinnamon-scented baked goods.

My favourite London Scandi bakery is Fabrique bakery. Every Sunday stroll around Shoreditch had to be accompanied by a cinnamon and cardamom bun from Fabrique in Hoxton. Chewy yeast buns, filled with cinnamon and cardamom-scented sugar and so sticky that you’d regularly have to lick your fingers. A pure delight.

When I moved to Luxembourg I really missed these incredible spiced buns. No doubt, we have great bakeries over here too and they make fabulous treats such as ‘Aachtchen’ (a custard-filled, 8-shaped pastry), ‘Äppeltäsch’ (an apple compote filled pastry) and ‘Schneck’ (a swirly pastry stuffed with currants). But no cinnamon buns – at least not the Swedish type.

So, on one weekend trip to London, I came across a Swedish cinnamon bun recipe in the Evening Standard (London’s daily free paper). I ripped out the page and had to recreate the recipe. Unfortunately, I misplaced the actual source of the recipe, so I’m not able to say where it came from. I’ve added a tad less cardamom than in the original recipe (as it just seemed too decadent to add more!) and I have to say, a bite of them brings me right back to Sundays in Shoreditch…

In a big bowl, crumble the yeast into the milk, and stir to dissolve. Add the butter and sugar and mix.

In a separate bowl, mix the flour, cardamom and salt. Gradually add to the liquid mixture while kneading with a freestanding mixer. Add the egg and knead the dough for 5 minutes. You want a soft, slightly sticky dough.

Shape the dough into a ball and cover the bowl with a teatowel. Leave to rest for 30 minutes.

Meanwhile, mix all the filling ingredients in a bowl.

After 30 minutess, turn the dough onto a lightly floured surface and roll out to a 40x50cm square.

Cut the dough into 18 strips. Roll a strip around 2 of your fingers, so that it gets a twisted shape, then fold into a snail, folding the end over the top and tucking it in below so you get a knot.

Put the knot onto a baking tray lined with baking paper. Cover with a teatowel and leave to rest for 30 minutes.

Preheat the oven to 180°C fan and bake the buns in the preheated oven for 12 minutes.

Heat the honey so it becomes runny and brush each warm bun with it, then sprinkle with pearl sugar.