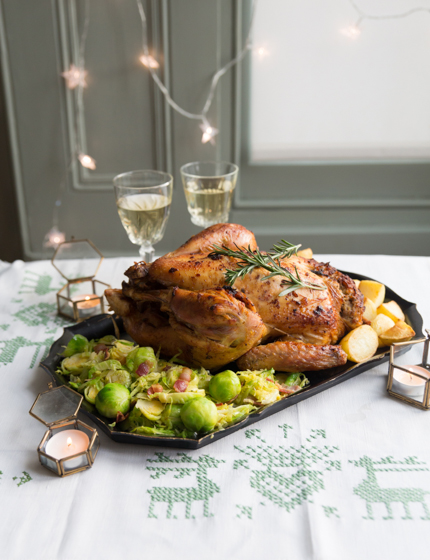 There’s no beating about the bush, a stuffed bird is the must-have for any traditional Xmas dinner. But, does it always have to be turkey?! This year I’ve decided to turn my attention to another lovely bird: a capon is a large castrated chicken, which stays really moist and is perfect for feeding a small crowd.

I’ve stuffed my bird with a heavenly apple and pork stuffing – I was lucky enough to find smoked sage at a farmer’s market, which really did the trick. You can of course use unsmoked dried sage instead.

As sides, I’ve made some lovely crispy goose-fat potatoes and stir-fried Brussels sprouts, which usually even convince the most dedicated sprout haters.

So, I hope you enjoy this festive main course, and I wish you a Merry Xmas!

1 tbsp flour, for the gravy

For the goose-fat potatoes

For the Brussels sprouts

Take capon out of the fridge an hour before putting it into the oven, so it can get to room temperature.

Meanwhile, prepare the stuffing. Melt the butter in a frying pan and fry the onion for 4 minutes until soft. Add the garlic and fry for another minute. Set aside and leave to cool. In a bowl, combine the pork mince with the sage, breadcrumbs, grated apple, egg and cooled onion and garlic. Mix well and season with salt and pepper.

Put the capon into a large roasting tin. Peel the onion and cut in half. Stuff one half into the bird’s cavity, followed by two garlic cloves, half the lemon, the remaining garlic cloves and the remaining onion half.
Put half the pork stuffing into neck part of the bird, making sure not to stuff it too tightly as the stuffing will expand in the oven. Close the neck skin over the stuffing and secure with a few tooth picks. Form little stuffing balls with the remaining stuffing mixture, place into a greased tin and put in the fridge until later.

Brush the bird with melted butter all over and season with salt and pepper. Place in the tin breast-side down and roast for 1 ½ hours – basting the capon regularly with the meat juices.

Take the bird out, pour the meat juices into a saucepan. Cover the bird in foil and leave to rest for 10 minutes before serving.

During that time, stir-fry the Brussels sprouts and make the gravy. Bring the meat juices to a boil, take out a few spoonfuls and put them into a little bowl. Add a tablespoon of flour to the bowl and mix until you have a smooth paste, add to the gravy and cook for another minute until it thickens.

For the goose-fat potatoes:

Peel the potatoes and cut into even-sized chunks.

Boil the potatoes in salted water for 5-6 minutes until almost cooked (they will still feel firm when pierced with a knife). Drain and shake the potatoes around a little in the colander until the outsides are roughened – this will make them really crispy.

Put the goose fat into a roasting tin and melt in the oven for 5 minutes. Take the tin out of the oven and carefully add the potatoes to the tin (watch out as the fat will be really hot). Crush the unpeeled garlic cloves by pushing down on them with a wooden spoon. Add to the tin with the rosemary and sprinkle everything with salt. Put in the oven and bake for 50 minutes.

Midway through the baking, after about 25 minutes, take out the tin out, give the potatoes a shake and roast for another 25 minutes.

For the Brussels sprouts:

Trim the Brussels sprouts and roughly chop. Cut the pancetta into thin slices.

Melt the olive oil in a pan, add the pancetta and fry until crisp. Add the chopped sprouts and the fennel seeds and stir-fry for 7 minutes or until soft. Add a splash of water if needed.

Crush the garlic clove and add for the last minute, stirring, then add the Worcester sauce, season with salt and pepper, give it another stir and serve.