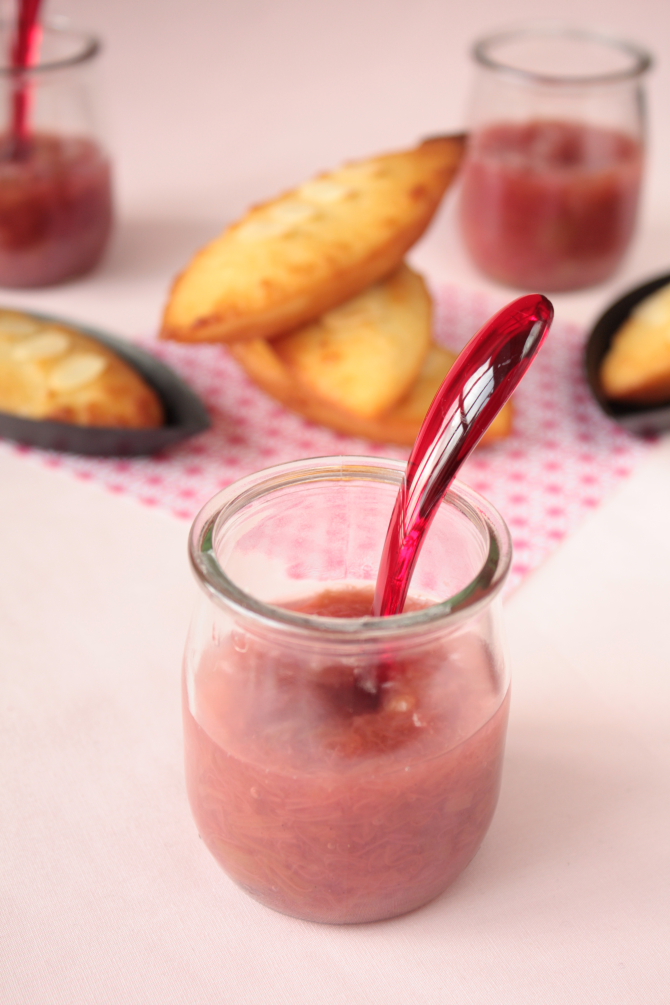 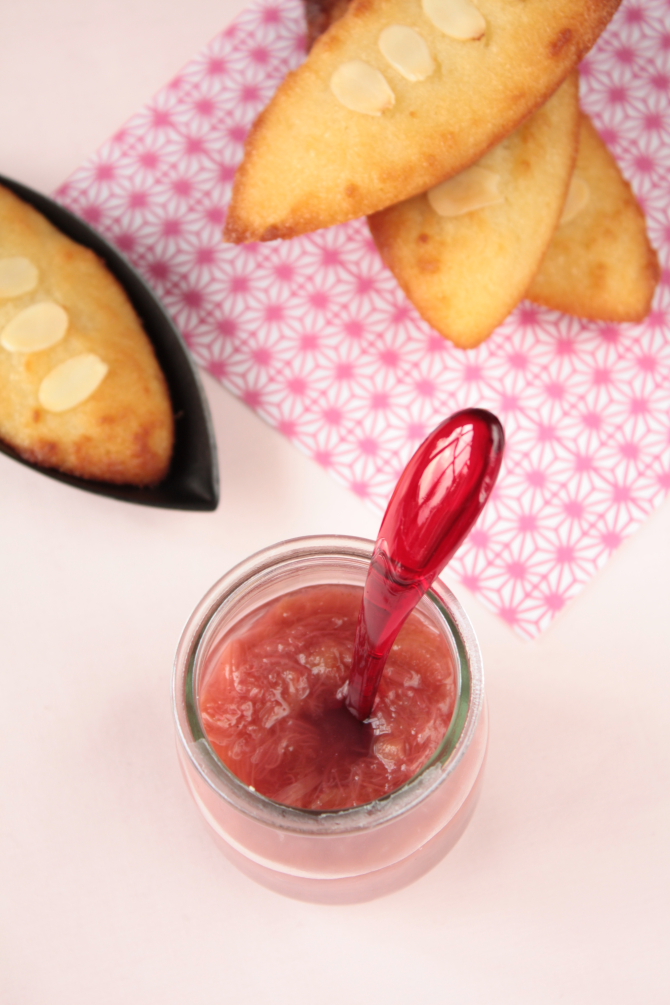 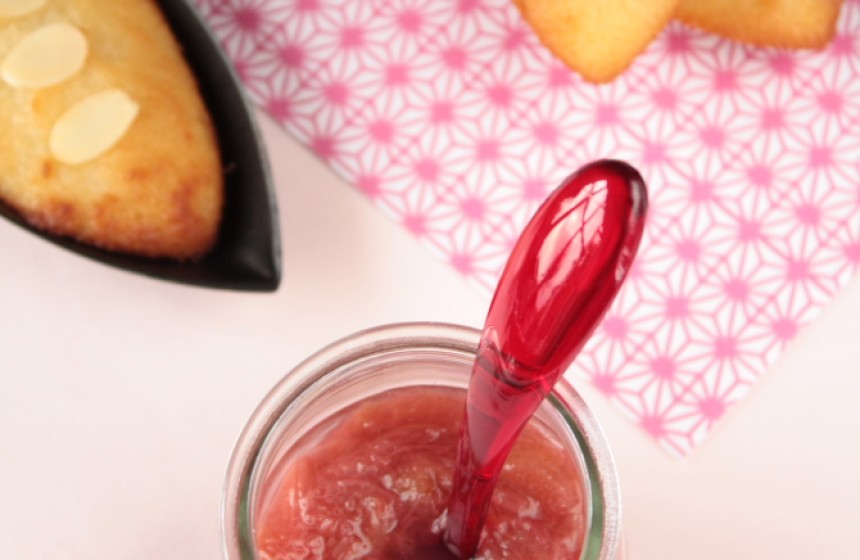 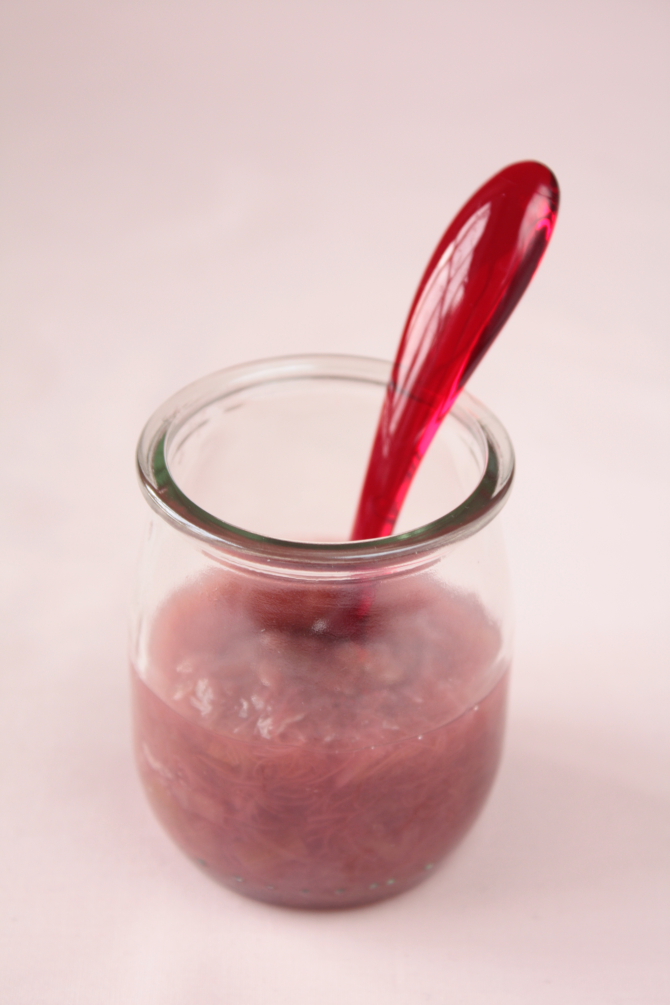 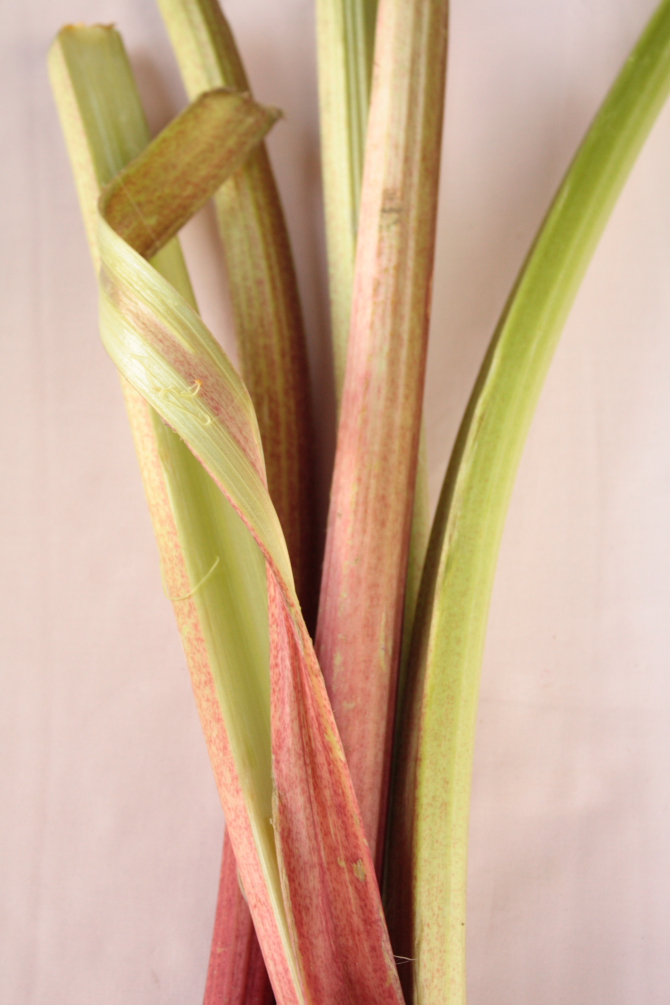 It’s rhubarb time! How fantastic is this? I love rhubarb! With its beautiful soft pink stalks, its stringy strings and its fabulously tart flavour.

Rhubarb always makes me think of my early days in Luxembourg. When I was little there was wild rhubarb growing in the property behind our garden. It was a disused back-garden of some stationery shop, and there, in the midst of that wild property, were batches and batches of rhubarb plants. So, every beginning of summer, our mum would send me and my sister on a mission to go and pick some of that wild rhubarb. It was one of our favourite adventures.

We felt like hunters. We would fight our way through the stalky hedges that separated our garden from the rhubarb ‘garden’, and come back with a few cuts and bruises and a big bunch of those pink stalks, which mum would transform into heavenly rhubarb tarts. Sweet thin shortcrust pastry, with a layer of sweetened rhubarb. I still dream of these tarts today. I’ll have to get that recipe. Mum, if you read this, please email the recipe over! I’m dying to make that tart!

So the other day I did my weekly fruit and vegetable shopping on Inverness Street Market. It’s a tiny market tucked away within the maze of hippie stalls around Camden. There, in the midst of heavily pierced Punks handing out flyers is a little haven of three food stalls. One selling fruit, one selling vegetables and one farmer’s stall selling seasonal British produce. It’s at the latter that I spotted a big bunch of rhubarb. I immediately had to buy some, even though I had no idea what I was going to make with it yet.

Afterwards, I was sitting in the sun on Camden Market, drinking my daily cinnamon cappuccino, and resting. My friend and barista at my local coffee shop F. came out to join me and spotted the bags full of market goodies next to me. F. was especially intrigued by those deliciously pink stalks sticking out of one of my bags. “What is this?” he asked. “Well, that’s rhubarb.” Blank stare. “Rhubarb. You know, what they put in crumbles and cakes?” Still a blank stare. F. had no idea what rhubarb was, let alone what it tasted like. I guess they don’t have rhubarb in Turkey where he’s from. “It looks African” was his final conclusion. No idea where he got that idea from, but hey, interesting comment, right?

So this got me thinking. How can you describe what rhubarb tastes like? Sour, tart, tangy? Goes great with custard, fantastic to put in crumbles, cakes and tarts? It all doesn’t seem to make that wonderful fruit any justice. I think everyone has to taste it for themselves!

Anyway, why not discover the fabulous world of rhubarb with this compote recipe? It’s damn simple, and damn tasty.

And whilst we’re at it, why not add some nice cake to go with the compote? I had some left-over egg whites in the fridge, so I was thinking about making financiers. It’s been on my to-do-list for a long time.

When I found this honey version, I knew I’d have to try it. I’ve had this amazing honey waiting in the cupboard to be used for a while. Tweedside honey, from a little honey farm in the UK. It was a present from my lovely, cool, superfriend Sian, who knows the people at the honey farm. Man, such great honey! It totally set the tone for these financiers!

The financiers themselves turned out absolutely lovely, crisp on the outside, and melting inside. Best serve them straight out of the oven, or on the same day, since they tend to lose their crispness if you store them overnight. But, either way, they’re delicious little golden cakes. Lovely. ★

makes 10 financiers and 10 jars of compote

Wash the rhubarb and chop off the top and bottom end and discard.

Cut the rhubarb into little slices of about 1cm each and put into a saucepan. Add 2 tbsp water and put on a medium heat. Once the mix starts cooking, add the sugar and leave to cook for about 5 mins or until it starts looking like a nice compote.

Taste the compote and add more sugar if it’s too sour. In the end, add a tablespoon of cinnamon and leave to cool (or eat warm, that’s yummy too).

Melt the butter and let it cool down.

In a bowl mix the almonds, sugar and flour and add the egg whites one at a time. Once it’s all well incorporated add the honey and butter and mix well.

Put the batter into 10 financiers molds (or cupcake molds), top with flaked almonds and bake for 20 mins.

Let the financiers cool down a bit before taking out of the molds. Best eaten warm or fresh on the day they are made.