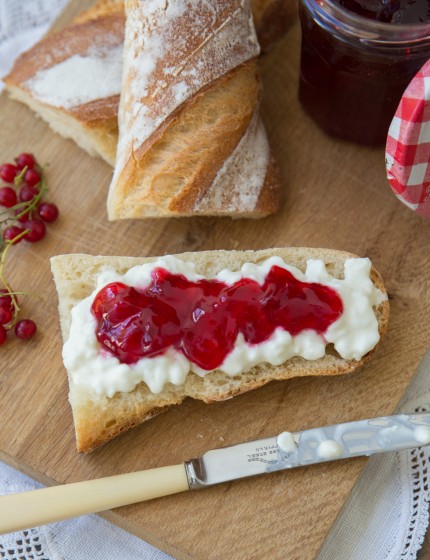 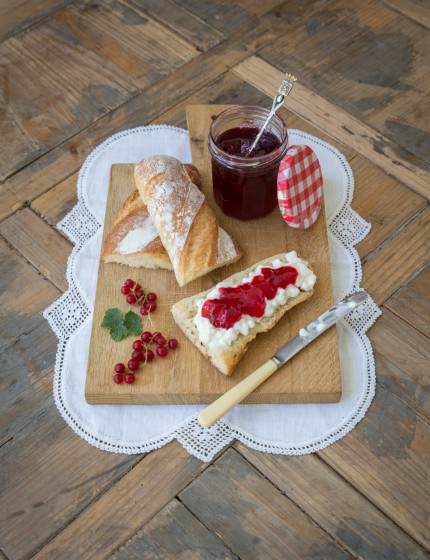 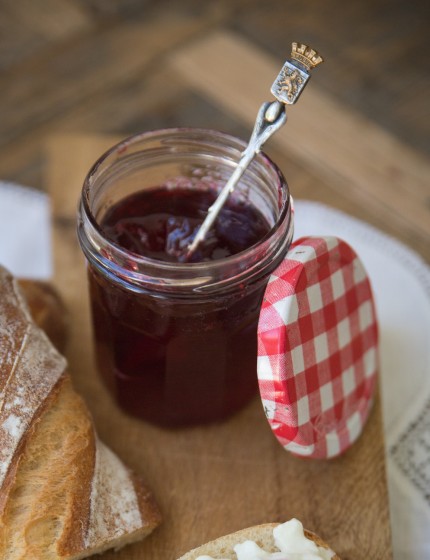 I know lots of people in Luxembourg who have redcurrant bushes in their gardens. The easiest way to use up large amounts of redcurrants is to make jelly with them! I decided to make mine with a hint of rosemary – it’s great on a slice of buttered bread or on some cottage cheese. The depth of flavor of the rosemary makes this jelly quite versatile as you can serve a dollop as a side with game or even add a spoonful to a meaty red wine sauce for a good balance of flavours.

Redcurrants are naturally high in pectin the fruit sugar that makes jelly or jam set. So you won’t need to buy special jam sugar with added pectin to make this redcurrant jelly.

You can watch me make this jam here.

Wash the jam jars and lids and put them on a clean tea towel, facing upwards. Once the oven is hot, put the jars on a baking tray and put into the oven for 10 minutes, then transfer to the tea towel. Meanwhile, bring a saucepan with water to the boil and boil the metal lids for 10 minutes, putting them on the clean tea towel to dry. Don’t be tempted to dry the lids with the tea towel, they should dry in the air.

For the jelly: Wash the redcurrants and put them into a large, heavy-bottomed saucepan, stalks on. Add the rosemary sprigs and a bit of water so the bottom of the saucepan is covered.

Put on a high heat and cook the redcurrants for 10 minutes, stirring regularly and pressing the berries from time to time so that they release their juices.

After 10 minutes, add the sugar, stir until dissolved and bring to the boil. Cook the fruit for 7 minutes.

Put a fine mesh sieve over a bowl.

After 7 minutes, take the fruit off the hob and (if using) add a shot of Kirsch and stir.

Pour a few ladles of the redcurrants into the sieve, pressing down with the ladle to release as much as juice as possible. Discard the pulp and stalks and repeat until all the redcurrants have been pressed.

Fill the hot jelly into the jam jars, close the lids tightly and put upside down on a cooling rack. Leave to cool completely before turning the jam jars over. To test if a vacuum seal has formed in the jars, you can press down the middle of the lid – if the lid springs back when you release the pressure, it’s not fully sealed and will only keep for a few weeks in the fridge. If the seal is tight, the jelly will keep in a dark, cool place for a at least a year.