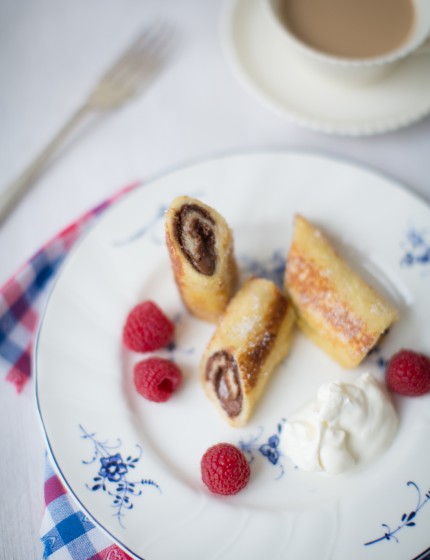 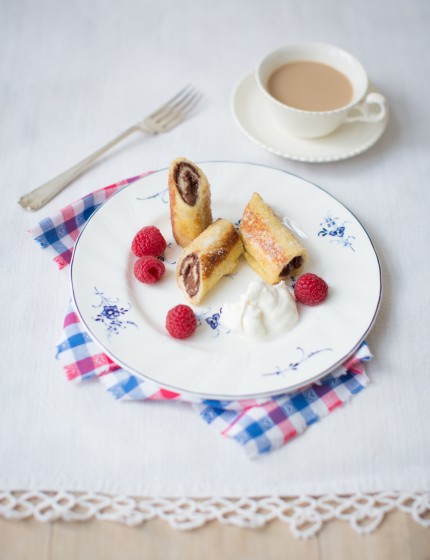 This is the most decadent French Toast you’ll ever have. Totally worth every calorie!

You can watch me make this recipe here.

Crack the egg into a deep plate, add the milk and beat with a fork until well mixed.

Lay one sandwich bread slice onto a work surface, and flatten with a rolling pin. Spread with 1 tbsp of Nutella. Roll the bread up and set aside. Repeat with the remaining bread.

Once all the bread rolls are done, melt the butter in a pan.

Dip each bread roll into the egg mix, so that the bread is fully covered in egg, then put all the rolls into the frying pan and fry for a few minutes until browned all around.

Meanwhile, put the sugar onto a deep plate and mix with a bit of cinnamon to taste.

As soon as the French toast rolls are done, dip each roll into the cinnamon sugar and roll around, so that the entire roll is covered with cinnamon sugar.

Cut each roll in half and put 4 halves onto each plate. Serve with a dollop of yoghurt and raspberries.

TIP:
• If you prefer a savoury breakfast you can replace the Nutella with a savoury filling: put a slice of cheese and a slice of ham onto the flattened sandwich bread, dip into the egg mix and fry on a low heat until the cheese inside has melted. A sort of ‘Croque monsieur French toast’!