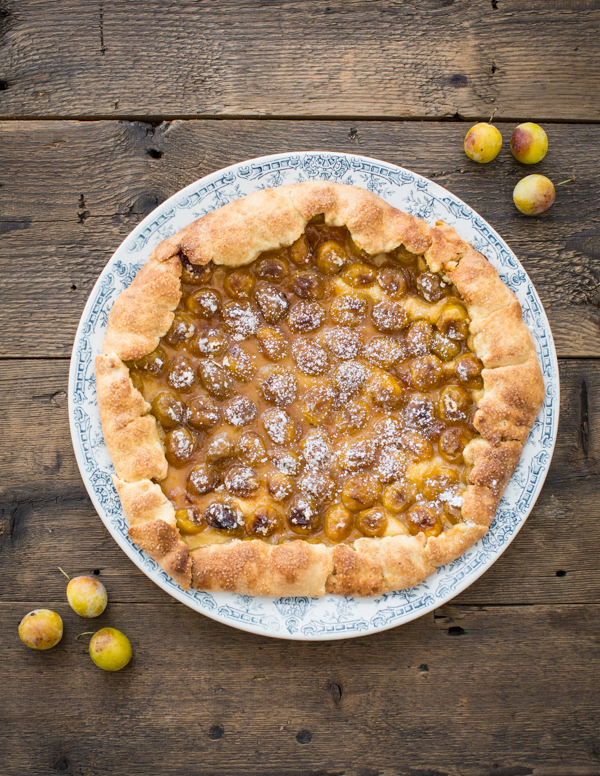 The subtle flavour of the mirabelle plum is easily overpowered by other flavours. So, this galette is keeping it very simple. A shortcrust pastry base is spread with a bit of mirabelle jam, then topped with stoned mirabelles. The pastry edges are folded over and sprinkled with a bit of sugar, and that’s it. A rustic tart that can be made without a tart tin.

Start by making the pastry:
In a food processor, mix the flour, icing sugar, butter, egg, lemon zest and salt so it becomes a dough. Put the dough onto a piece of cling film, flatten into a disk, wrap and refrigerate for 1 hour.

After 1 hour, take the dough out of the fridge and roll out thinly on a floured surface.

Cut the mirabelles in halves, remove the stones and toss with 1 tablespoon of cornstarch.

Dust a work surface with flour and thinly roll out the pastry in a disk shape of approximately 35cm.

Spread the jam all over the disk, leaving a 5cm border around the edge of the pastry.

Distribute the Mirabelle halves all over the jam, then fold over the border, so that it partly covers the fruit.

In a bowl, mix the demerara sugar and the cinnamon.

Brush the pastry border with milk, then sprinkle the cinnamon sugar all over the border and the fruit.

Bake in the preheated oven for 40 minutes. Leave to cool before serving.

TIP: This can be made with other fruit: apples, blueberries, apricots, peaches and cherries work particularly well.