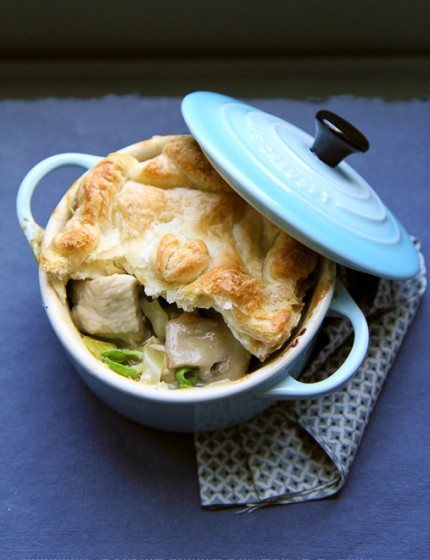 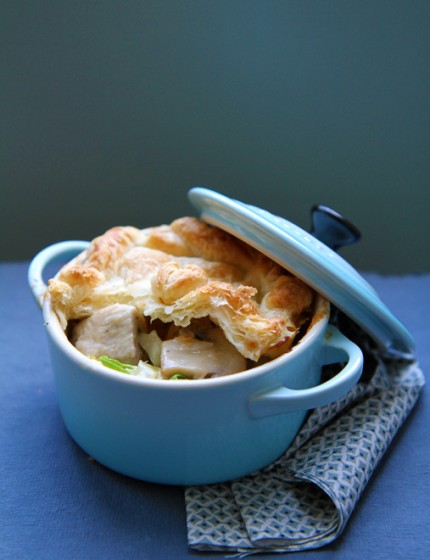 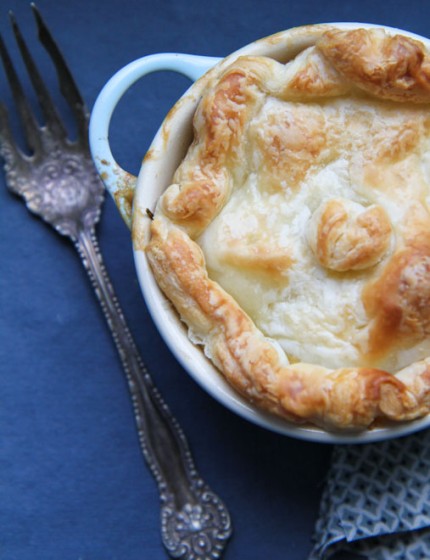 It’s gone quite bloody freezing over here in the UK again. So, time to whip out some comfort food!

One thing the Brits are really damn good at is pies. Old-fashioned crusty pies, filled with all kinds of comforty goodness – from hearty steak and ale fillings to creamy fish pies –  a pie is always a winner.

You can really just chuck in anything, and as soon as you cover it with some puff- or shortcrust pastry or even creamy potato mash, you may name it a pie. Seriously, go on, open your fridge, see what’s left, throw it together in a pan, add some sauce and make a pie with it. Simple as that!

I like to keep some puff pastry as stand-by ingredient in the freezer, since you never know when you may need to whip up a pie, a tart or some cheese straws as appetizer. Magic ingredient, that puff pastry.

So, when the weather turned cold again, the wind howling around the house and raindrops bashing against my windows, I knew it was time to defrost that puff pastry!

I decided to make a very classic British pie, a chicken, leek and mushroom pie. Apparently, that’s what all British schoolchildren get served at school when they’re little, so it’s kind of a national dish.

Since I have no British childhood memories to dwell on, I just got on with it and created a chicken, leek and mushroom pie – the way I envision it. With lots of white wine (which, I’m pretty sure, no school canteen would have ever used) and rosemary (giving it a Meditteranean touch). Turned out absolutely lovely.

Cut the chicken breasts into bite-sized chunks. Heat 1 tbsp oil in a pan and sear the chicken with a pinch of salt until you can’t see any pink bits anymore.

Meanwhile, wash the mushrooms and leek and cut them into slices.

Once the chicken is seared, remove from the pan and put aside until later.

Pour 1 tbsp oil into the pan and now fry the mushrooms and leek with the rosemary and a pinch of salt for a few minutes. Once they’re soft, add the garlic and fry for another minute. Then, put the chicken back into the pan with the other ingredients. Add the flour, wine and chicken stock and bring to a boil. Let it cook for a minute. Add the crême fraîche and season. Take off the heat.

Pour the chicken mix into an ovenproof dish. Top with the puff pastry sheet, which you tuck in on the sides.

Bake the pie for 20 minuts or until the pastry is golden brown and crisp. Serve with mashed potatoes and French beans.