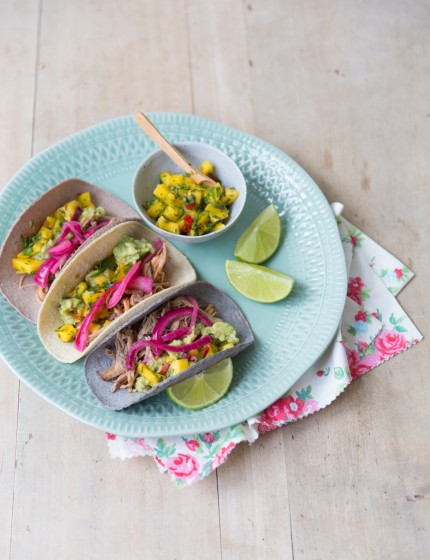 I absolutely adore tacos, and I dream to visit Mexico one day to eat proper tacos in Mexico city. For now, I have to make my own tacos at home. I’ve already made crispy fish tacos in my second book, and I have played with vegan and vegetarian tacos (check out my autumnal vegan tacos, my sweetcorn and feta tacos and my veggie summer tacos). Today, I’m bringing you my absolute favourite to date: pulled pork tacos.

The pork is slow-cooked for 4 hours in the oven, with beer, orange juice, oregano and lots of garlic – and then pulled apart before serving. I’m pairing the meat with pickled red onions and guacamole. The guacamole in this recipe is quite basic, as there are so many flavours going in in these tacos that all you really need is the creaminess of mashed avocado to balance it all out. For my proper guacamole recipe, turn to the Luxembourg Nachos recipe here.

By the way, these beautiful corn tortillas are handmade in Luxembourg, by the guys behind Secretos Del Maiz. They make the tortillas from scratch once a week and deliver them in Luxembourg – mine are still warm every time they drop them. You should also order their Nachos, they’re absolutely fantastic!

You can watch me make these tacos here.

For the guacamole:
4 avocados
lime juice, to taste
salt and pepper

Heat the olive oil in a large heavy-bottomed saucepan and brown the meat on all sides.

Once browned, add the radler and beer. Peel off two strips of orange peel and add to the liquid, press the orange and add the juice to the pan.

Cut the garlic bulb in half and add both unpeeled halves to the pan, along with the bay leaves, cinnamon stick, rosemary, oregano, salt and pepper.

Cover and cook in the preheated oven for 4 hours.

Meanwhile, prepare the other toppings:

For the pickled red onions: Peel and finely slice the onions. Heat the vinegar, sugar, salt, fennel seeds and peppercorns in a saucepan until the sugar is dissolved and the liquid boiling. Take off the heat, add the onions, give it a good stir and set aside to pickle for 3 hours at room temperature – stirring the onions a couple of times.

For the mango salsa: Peel the mango and cut into small dice. Trim and deseed the chili and finely chop. Put in a bowl and add the coriander and mint. Season with lime juice, a glug of olive oil and salt and pepper. Refrigerate until needed.

For the guacamole: Cut open the avocados, destone and scoop out the flesh. Roughly chop, put in a bowl and mash with a fork. Season with lime juice, salt and pepper.

After 4 hours, remove the pork from the oven. Lift the pork into a tray and pull apart the meat with two forks. Remove the aromatics from the juices in the saucepan. Mash the soft garlic cloves with a fork and put back in the pan, discard the other aromatics. Put the pulled pork back in the pan with the juices and stir so all the meat is soaking up some liquid.

Heat the tortillas before serving – put them in a teatowel and microwave on a high setting for a minute or so. Alternatively put them covered in the teatowl in a 130°C oven with a bowl of water at the bottom to heat through for a few minutes (you don’t want them to dry out!).

Put all the toppings, meat and tortillas on the table and have people build their own tacos. Serve with hot sauce, coriander and lime wedges.

*can be replaced with a bottle of lager beer, just add 4 strips of orange peel instead of 2.