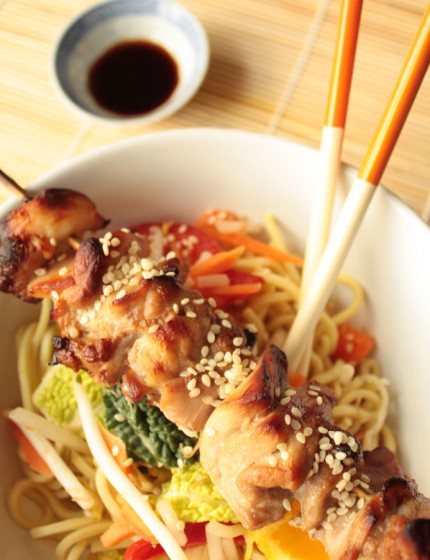 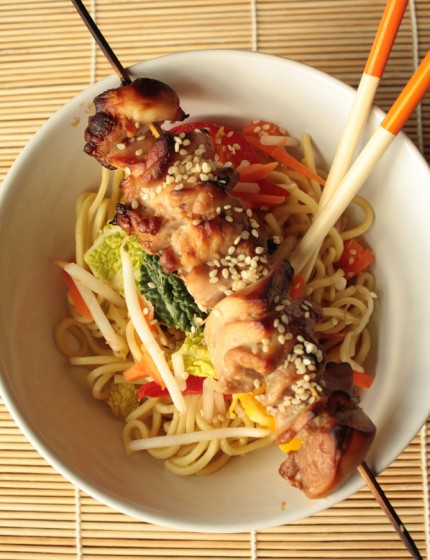 If there’s one place and one cuisine I’m obsessed about then it’s definitely to be found over there! Like tonight I was out in central London at Abeno stuffing myself with Okonomiyaki, those round cabbage pancakes that are covered in Japanese Mayonnaise and Okonomiyaki sauce (a bit like a Japanese Worcester sauce) and Bonito flakes (smoky dried tuna flakes – to die for!).  The dinner was in fact my thank you for Lawrence, who kindly designed this page for me.

You see, last Autumn Lawrence, my sister and another friend went on a trip to Tokyo and Kyoto. And on one of our last night, Lawrence and I went to this tiny Okonomiyaki place. And I think that kind of changed Lawrence’s life (or at least for one night it did). His eyes got that twinkle and he just couldn’t help but be mesmerized by the sizzling disks of egg mix on the hotplate in front of us. Who cares if we smelled like fried bacon and eggs afterwards?! Who cares if it got so hot we had to kill the heat by drinking bottle after bottle of cold sake?! It was divine. Amazing. If there is a heaven on this earth then it is in that tiny little side alley in Asakusa, where for one night Lawrence and I binged on Okonomiyaki…

Anyway, what has that to do with Teriyaki?! Well, apart from it rhyming with Okonomiyaki, not much. But hey, nice story, right?

Now, over to Teriyaki. I like those chicken skewers very much. You see I was a vegetarian for about 8 years (!), and throughout all this time I craved smoked flavours (which lead to a lot of smoked cheese consumption). So, ever since I’ve turned back onto meat-eating (and yes, that’s another story, you’ll get to hear one day), I’ve been indulging in smoked meat, like smoked bacon, smoked chicken, smoked everything. And the beauty about chicken teriyaki is that it has that smoky taste without actually having been smoked! Instead, it’s just marinated in teriyaki sauce (a mix of strong soy sauce, sake and mirin), et voila, you get a Japanese smokiness!

Ok, I have to shamefully admit that I did not make my own teriyaki sauce, but then, who in Tokyo please makes it?! They don’t have any space in their tiny little Tokyo apartments, right? So, if they can’t make it in their little homes, then how the heck are we supposed to make it in our tiny London flats? Right? Right!

(Ok, no, it wouldn’t have been too much hassle actually, but hey, Kikkoman has this amazing teriyaki sauce, so make sure you get that or a proper Japanese equivalent if you want to make this – don’t go for some Sharwoods or other so-called Asian brand! Yes, here speaks the food-snob in me…).

Marinate the chicken in teriyaki sauce for about 1 hour (the longer, the better).

If you use wooden skewers, soak them in water for 5 mins so they don’t burn under the grill. Skewer the chicken and put under a hot grill. If you use the oven grill, make sure to keep the oven door open, otherwise your smoke alarm might get some action. Grill from each side for about 10 mins, or until the chicken gets a nice dark brown colour..

Meanwhile, stir-fry the vegetables with the condiments for 2 mins, add the fresh noodles and stir-dry until everything gets piping hot but is still crunchy. Put into bowls and top with the chicken skewers. Sprinkle with sesame seeds. Voila.