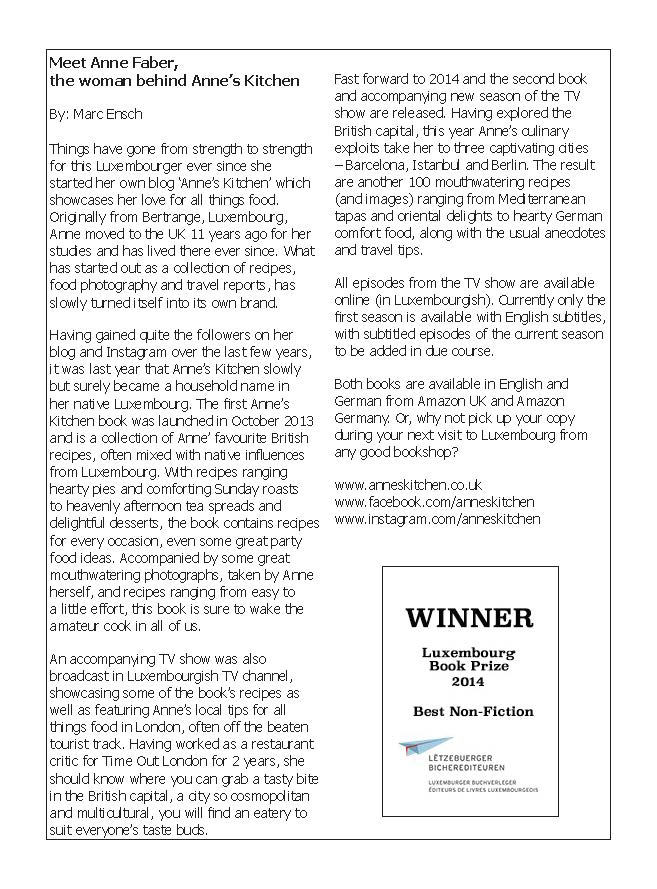 Things have gone from strength to strength for this Luxembourger ever since she started her own blog ‘Anne’s Kitchen’ which showcases her love for all things food.
Originally from Bertrange, Luxembourg, Anne moved to the UK 11 years ago for her studies and has lived there ever since. What has started out as a collection of recipes,
food photography and travel reports, has slowly turned itself into its own brand.

Having gained quite the followers on her blog and Instagram over the last few years, it was last year that Anne’s Kitchen slowly but surely became a household name in
her native Luxembourg. The first Anne’s Kitchen book was launched in October 2013 and is a collection of Anne’ favourite British recipes, often mixed with native influences
from Luxembourg. With recipes ranging hearty pies and comforting Sunday roasts to heavenly afternoon tea spreads and delightful desserts, the book contains recipes
for every occasion, even some great party food ideas. Accompanied by some great mouthwatering photographs, taken by Anne herself, and recipes ranging from easy to a little effort, this book is sure to wake the amateur cook in all of us.

An accompanying TV show was also broadcast in Luxembourgish TV channel, showcasing some of the book’s recipes as well as featuring Anne’s local tips for all things food in London, often off the beaten tourist track. Having worked as a restaurant critic for Time Out London for 2 years, she should know where you can grab a tasty bite in the British capital, a city so cosmopolitan and multicultural, you will find an eatery to suit everyone’s taste buds.

Fast forward to 2014 and the second book and accompanying new season of the TV show are released. Having explored the British capital, this year Anne’s culinary exploits take her to three captivating cities – Barcelona, Istanbul and Berlin. The result are another 100 mouthwatering recipes (and images) ranging from Mediterranean tapas and oriental delights to hearty German comfort food, along with the usual anecdotes and travel tips.

All episodes from the TV show are available online (in Luxembourgish). Currently only the first season is available with English subtitles, with subtitled episodes of the current season to be added in due course. Both books are available in English and German from Amazon UK and Amazon Germany. Or, why not pick up your copy during your next visit to Luxembourg from
any good bookshop?