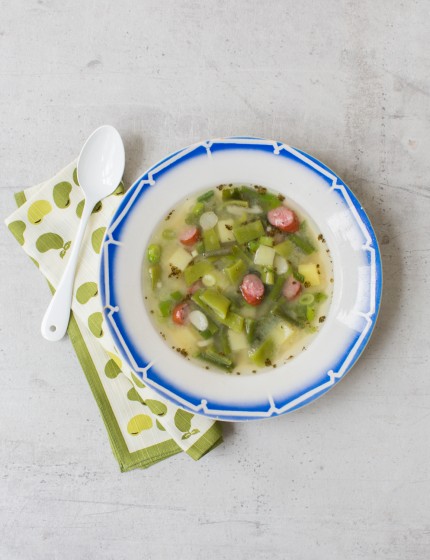 Bouneschlupp is a really traditional Luxembourg dish: a hearty green bean soup that’s specked with bacon lardons and served with a dash of cream. I like to play with variations of this classic, and have on previous occasions made it with Thai flavours and with German Suppenknödel.

Put the water into a large saucepan, cover and bring to the boil.

Add the potatoes and beans to the boiling water, cover, and leave to simmer for 12 minutes, until the vegetables are cooked through.

Meanwhile, slice the spring onions and the Mettwurscht sausages.

After 12 minutes, empty the contents of the miso soup sachets into the water with the vegetables. Add the spring onions, Mettwurscht slices and the summer savoury and cook for another minute so that the sausages are heated through.

Distribute the soup between three plates and serve immediately.