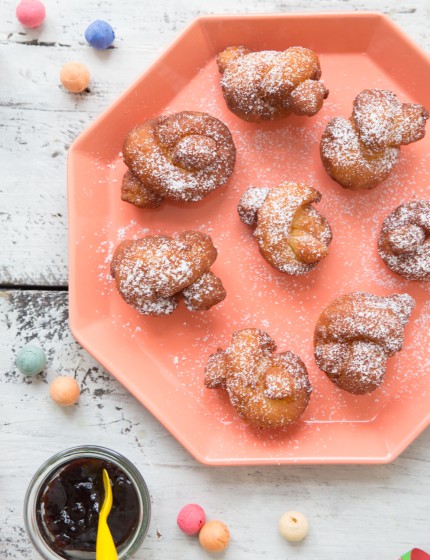 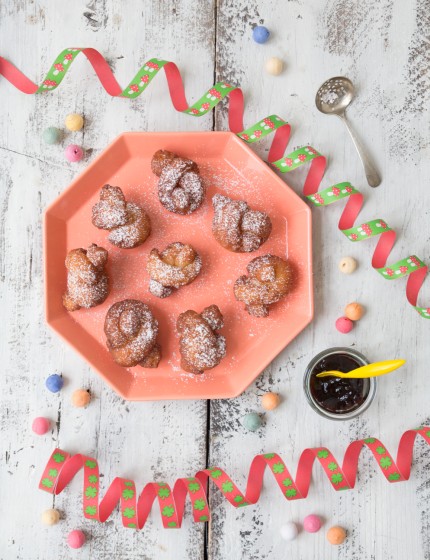 As soon as gloomy January is over, Luxembourg dives right into festive mode with the start of Fuesent – carnival season. Besides fancy dress parties and cavalcades across the country, carnival is really the time to head to your local bakery and try out Verwuerelter, which are only around at this time of year. Verwuerelter are deep-fried pastry knots dusted with icing sugar. They’re also fondly called Verwuerelt Gedanken, “scrambled thoughts” – the origin behind this curious nickname remains unknown to me.

The Verwuerelter dough is similar to that of a doughnut: butter, eggs, flour, milk and fresh yeast are kneaded into a dough ball and left to rise in a warm spot. Strips are then cut off the risen yeast dough and wrought into knots before being deep-fried and dusted with icing sugar. They taste best fresh, but I found that freezing leftovers on the day they’re made works well too.

So, if you want to make Verwuerelter at home, try my mum’s recipe! I’ve added a sprinkle of cinnamon to the icing sugar and like to eat my Verwuerelter with a dollop of Quetschekraut, Luxembourg’s delicious damson jam.

For the ‘starter’, put the flour into a large mixing bowl and make a well in the centre. Crumble the yeast into a jar and mix with the lukewarm milk and 1 tablespoon of sugar until diluted. Pour the yeasty milk into the well, making sure that the liquid doesn’t spill too far out of the well.

After the 30 minutes, add the remaining sugar, butter, eggs and salt to the ‘starter’ and mix with the kneading attachment of an electric hand or stand mixer. Once the dough starts to come together, add the rum and work into a smooth dough, using your hands if needed.

Cover the bowl with the tea towel and leave to rise at room temperature for 1 hour.

After 1 hour, take the dough out of the bowl and put on a floured surface. Knock the dough back by briefly kneading it, then roll out to 1 cm thick.
Cut the dough into long strips of approximately 10 x 2 cm. Tie each strip into a loose knot and place onto a baking tray. Cover the knots with a dry tea towel and leave to rise at room temperature for 30 minutes.

While the knots are rising, heat the oil to 180°C in a deep-fat fryer (without the basket) or in a deep saucepan.

Fry the knots in batches so the fryer does not get overcrowded and there is enough room for all the knots to float on the surface. Fry for 1 1⁄2 to 2 minutes on one side until well browned, then turn them over to brown the other side.
Remove the baked knots with a slotted spoon and put onto kitchen paper to drain some of the oil.

Just before serving, mix the icing sugar with some cinnamon and sprinkle over the Verwuerelter. Serve with damson jam on the side.

TIP: These Verwuerelter freeze incredibly well. Just freeze them on the day of making without the icing sugar and reheat them in the microwave for a few seconds.