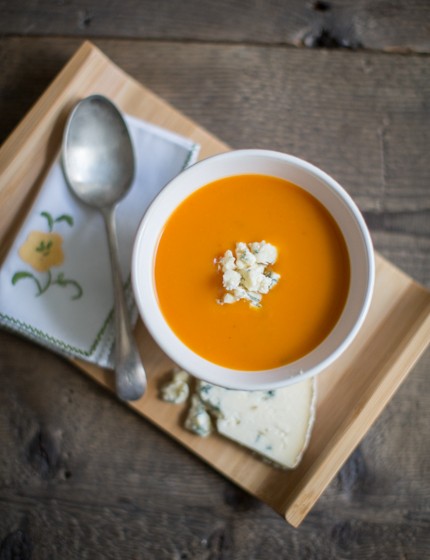 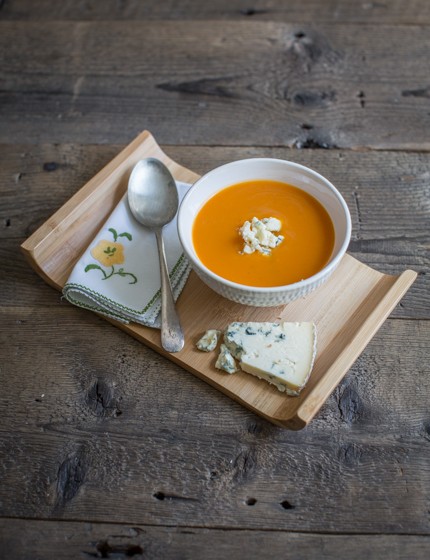 Autumn for me is soup season for sure! I’m making a new batch of soup with seasonal veg every week and freeze a few portions for unplanned mid-week lunches/dinners.

One thing I’ve started doing since I’ve been living in the UK is sprinkling every soup with some kind of topping. From crunchy flavoured bread croutons and roasted nuts to a dollop of pesto or herby crême fraiche – there’s always something extra that comes with my soups. For this roasted pumpkin soup, I’ve decided to make use of some Stilton (British blue cheese) that was lying around in my fridge. And, just like that, my humble pumpkin soup turns into a super duper flavoursome autumn star! Proof for the magic powers of the soup topping!

Cut the pumpkin into 2cm cubes and put into a baking dish. Add the unpeeled garlic cloves, the rosemary and drizzle with olive oil.

Toss and season with salt and pepper. Bake in the preheated oven for 25 minutes until the pumpkin is completely soft and starting to caramelize around the edges.

Discard the rosemary sprigs. Pop the garlic cloves out of their skins and add together with the pumpkin to a saucepan.

Add the stock and bring to a boil. Cook for 5 minutes, then take off the heat and purée with a stick blender. Add the lemon juice and season the soup to taste.

Serve each portion of soup with a bit of crumbled Stilton or Roquefort.

One thought on “Roast Pumpkin Soup with Blue Cheese”