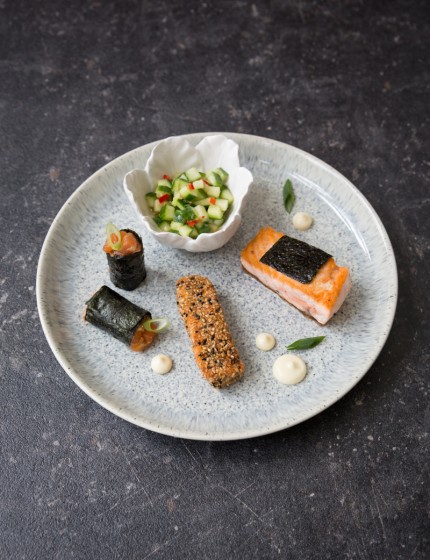 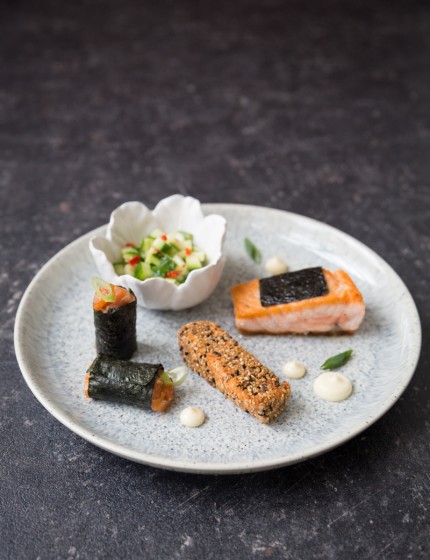 In the final of Mastercook, we asked the candidates to come up with a delicious main course centring on salmon – cooked in 3 different ways.

Here is my suggestion of a ‘salmon 3 ways’ dish playing with Japanese flavours: a wasabi salmon tartar wrapped in a nori leaf, a sesame and shichimi togarashi crusted fish finger and a pan-fried salmon fillet topped with a nori leaf. I’m serving the dish with a Japanese cucumber side salad, you could also serve rice to make it more filling.

Don’t be fooled by this dish: it looks stunning but is actually quite quick and easy to prepare. A real showstopper for when you have guests to impress!

For the cucumber salad:

Start by making the cucumber salad.

Wash the cucumber, cut open lengthwise and remove the watery seeds with a spoon. Cut into small dice and put into a salad bowl.

Peel and finely grate the ginger and put into a small bowl. Add the sugar and rice vinegar and mix. Pour over the cucumber and set aside.

Next, make the tartar.

In a bowl, mix the soy sauce, ginger and wasabi. Cut the salmon into small cubes and add to the bowl with the chopped spring onion. Cover the bowl with cling film and refrigerate until later.

Just before serving, cut the nori sheet into 3 long strips. Top the end of each strip with a generous teaspoon of salmon tartar and roll up – humidifying the uncovered end of the nori strip with a bit of water to make it stick.

For the fish fingers:

Next, make the fish fingers.

Crack the egg into a second bowl and beat.

Cut the salmon into two 2x10cm long strips. Dip each salmon strip into the beaten egg, then roll in the sesame mix so that every side is covered.

Heat a bit of sunflower oil in a frying pan and fry the fish fingers for 45 seconds on each of its four sides. Drain on kitchen paper and cover with foil until serving.

For the pan-fried fillets:

Finish by cooking the fillets. Cut the salmon into two 100g fillets, season with salt.

After 3 minutes, turn the salmon fillets over, onto the nori side, and fry for another 2 minutes so that they’re warm but still pink inside.

Dress the plates by putting some cucumber salad onto each plate, two tartar nori rolls, a fish finger and a salmon fillet. Add a few dollops of mayonnaise and serve immediately.