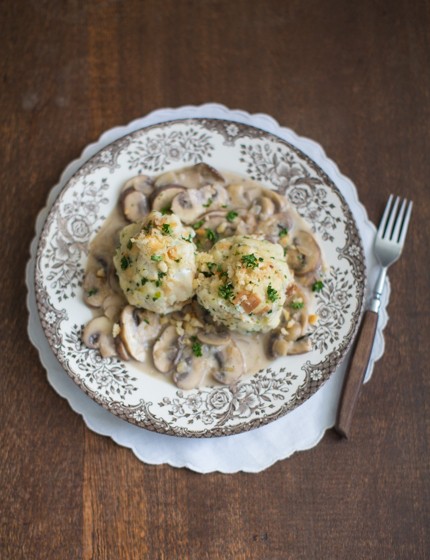 This is a classic German vegetarian dish and proper autumn comfort food. I’ve given the dish some additional crunch by making a simple pangrattato and sprinkling it over the dumplings just before serving. Köstlich!

I made these dumplings in the second Berlin episode of my show, you can watch it here.

Start by making the pangrattato: put the stale bread, rosemary and salt into a food processor and pulse until you have fine breadcrumbs. Melt the butter in a large frying pan and fry the breadcrumbs for 5 minutes until golden and crispy. Put into a bowl and set aside.

Cut the bread for the dumplings into small 1cm cubes and put into a bowl.

Heat the milk so that it’s boiling, pour it over the bread, cover with a tea towel and set aside for 30 minutes.

Peel and finely chop the 6 shallots (for the dumplings and for the sauce). Peel and crush the garlic cloves. Heat 60g butter in the same large frying pan and fry the shallots for 5 minutes until soft. Take off the heat and add one third of the shallots to the bread. Set the frying pan with the remaining shallots aside for later.

Make the dumplings: add the parsley, eggs, flour, breadcrumbs and parmesan to the bread/onion mix. Season with nutmeg, salt and pepper and mix everything with a spoon. Once it’s all combined, mix again with your hands. Wet your hands and shape the bread mix into 8 tight golf ball-sized dumplings, pressing each dumpling so that they won’t fall apart while cooking.

Bring salted water to the boil in a large saucepan. Reduce the heat to a low simmer and carefully lower the dumplings into the water with a slotted spoon. Cover and leave to simmer for 15 minutes.

Meanwhile, prepare the sauce: Clean the mushrooms and cut into thin slices. Put the frying pan with the cooked shallots back on the hob. Bring to a sizzle and add the crushed garlic cloves and rosemary stalks. Fry for another minute, then add the mushrooms and season with salt and pepper.

Fry the mushrooms until they start to release their juices, then add the white wine. Bring to the boil, turn down the heat and simmer for 5 minutes.

Add the crème fraiche to the mushrooms and bring to the boil. Put the cornflour in a small bowl, add a few teaspoons of the wine sauce, dissolve and pour the liquid back into the frying pan. Simmer for another 3 minutes. Remove the rosemary before serving.

Remove the dumplings from the saucepan with a slotted spoon. Put a generous ladle of mushroom sauce onto each plate, top with two dumplings and sprinkle with pangrattato and fresh parsley.

One thought on “Bread Dumplings with Mushroom Sauce”