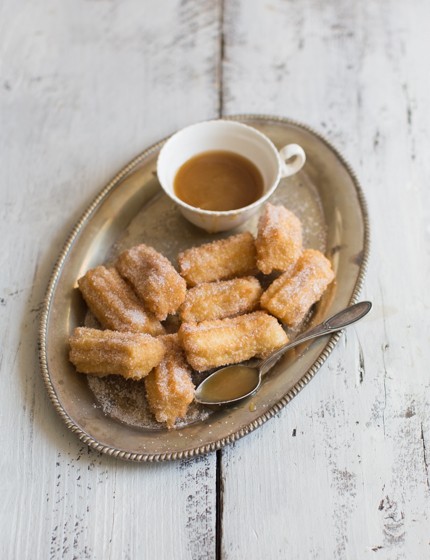 I’m a big fan of deep-fried sweet pastries: doughnuts, Berliner, Verwuerelter – I love them all. No surprise then that I’m completely infatuated with churros, especially since they’re covered in cinnamon sugar. I get my yearly fix of churros at the Luxembourg Schueberfouer, a big fun fair that comes to town each summer. Traditionally, churros are served with a melted chocolate dipping sauce but I like serving mine with a boozy whisky caramel sauce instead. It’s fun to make these with friends on a lazy Sunday afternoon.

This dish featured in the third of my Barcelona travel episodes, you can watch me make it here.

Start by making the churros batter: put the butter and a pinch of salt into a saucepan, add 165ml of boiling water and bring to a rolling boil until all the butter has melted.

Lower the heat and beat in the vanilla bean paste, flour and baking powder. Stir vigorously for about a minute until the batter pulls away from the sides of the pan and forms a ball.

Remove from the heat and beat in the eggs one after the other. It may look like it won’t come together at first, but just keep beating until smooth. Leave the dough to rest for 10 minutes.

Meanwhile, make the cinnamon sugar by mixing the sugar and cinnamon on a plate.

Then, make the whisky sauce: Put the butter, brown sugar and 1 tablespoon of the cream into a small saucepan and, stirring constantly, melt and combine for 3 minutes.

Add the whisky and stir. Bring to the boil and stir in the remaining tablespoon of cream. Boil for another 2 minutes, then take off the heat and pour into a serving bowl.

Put the batter into a piping bag fitted with a large star-shaped nozzle. (At this stage you can leave the batter in the piping bag at room temperature for a few hours until you need it. Seal the back of the piping bag and cover the nozzle with cling film so the dough doesn’t dry out.)
Heat the oil in a wok or large, deep saucepan. Add a small amount of batter to the oil: if it sizzles and browns within 45 seconds, the oil is hot enough and you can start deep-frying the churros.

Pipe 5cm strips of dough into the oil, cutting them off with a pair of scissors. Don’t pipe in more than 12 churros at a time, otherwise the wok becomes too crowded and the churros will stick together. Fry the churros until they’re golden brown, for about 4 minutes, turning them from time to time.

Remove from the oil with a slotted spoon and briefly drain on absorbent kitchen paper, then lift onto the plate with the cinnamon sugar and roll in the sugar.

Repeat with the remaining batter. Serve the churros hot with the warm whisky caramel sauce.

TIPS:
• If you prefer to make a traditional chocolate sauce, melt 100g dark chocolate with 50ml cream over a low heat and serve hot.
• If you’d like to reheat some leftover churros, pop them into a 200°C oven for 5 minutes.

One thought on “Churros with Whisky dipping sauce”