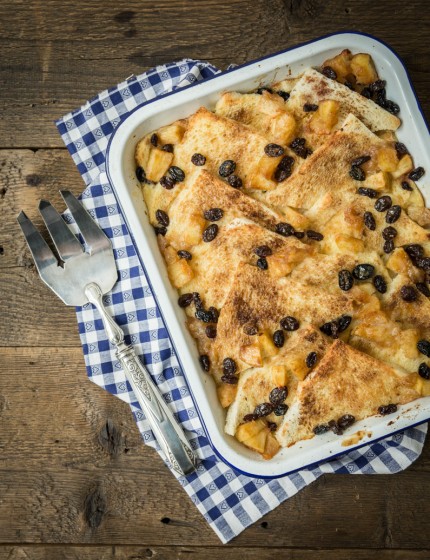 Bread and butter pudding is a staple in any British kitchen. A humble dessert made from stale bread, baked in an eggy custard with currants – real simple comfort food. When I was asked to develop a few ‘no waste’ recipes for a showcooking event, I immediately thought of bread and butter pudding. It’s the perfect bake for leftover bread, brioche or even croissants or pain au chocolat. Simply pour the hot custard over the bread and bake for 30 minutes.

For my bread and butter pudding I’ve also added apple pieces, which I’ve mixed with a bit of cinnamon. It’s another great way to use up leftover fruit that’s turning a bit wrinkly.

Put the sultanas in a bowl and top with a bit of boiling water. Leave to soak while preparing the rest.

Peel and core the apples (use the peels in apple tea). Cut into bitesized cubes and put in a saucepan with the sugar, cinnamon and apple juice. Put over a high heat and cook for approx. 10 minutes, stirring regularly, until the apples are soft. Set aside.

To make the custard, heat the milk, cream and vanilla in a saucepan to just below boiling point. Meanwhile whisk the eggs with the sugar in a jug. Slowly pour the warm milk mixture over the eggs, while stirring vigorously until smooth.

Lightly butter an ovenproof dish approximately 20x30cm. Cut the crusts from the bread slices* and cut into triangles.

Melt the butter and brush both sides of the bread. Lay half of the bread slices in the bottom of the dish so that they are slightly overlapping.

Drain the sultanas. Distribute half the apples and half of the sultanas over the bread. Pour over half the custard.

Layer the rest of the bread on top then sprinkle over the remaining dried fruit.

Pour the remaining custard over the pudding.

Sprinkle with the cassonnade and bake for 35 minutesuntil golden brown. Serve immediately.

*make breadcrumbs from the crusts by whizzing the bread in a food processor. Store in a jar until needed.