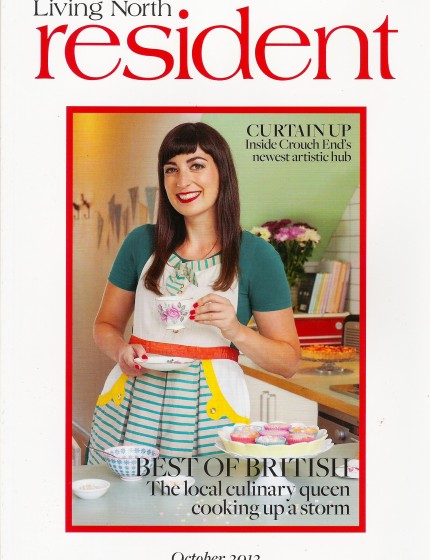 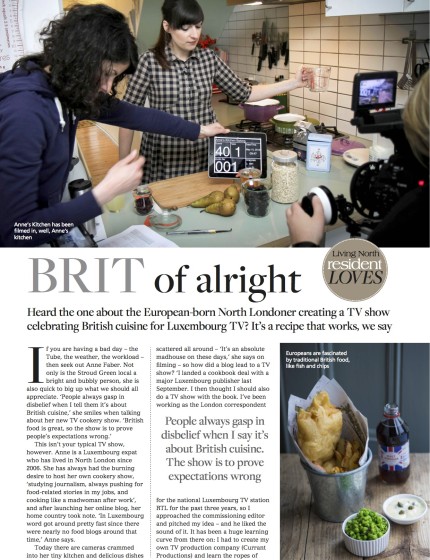 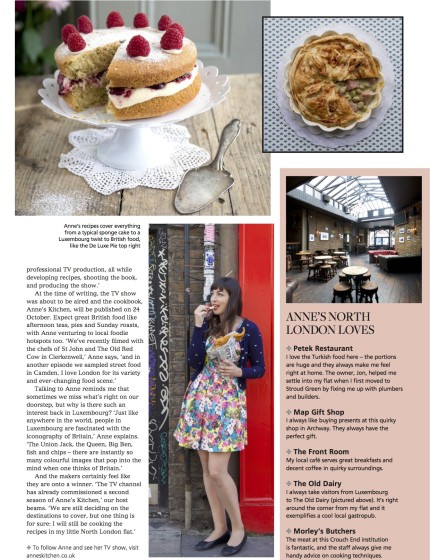 Heard the one about the European-born North Londoner creating a TV show celebrating British cuisine for Luxembourg TV? It’s a recipe that works, we say.

If you are having a bad day – the Tube, the weather, the workload – then seek out Anne Faber. Not only is the Stroud Green local a bright and bubbly person, she is also quick to big up what we should all appreciate. ‘People always gasp in disbelief when I tell them it’s about British cuisine,’ she smiles when talking about her new TV cookery show. ‘British food is great, so the show is to prove people’s expectations wrong.’

This isn’t your typical TV show, however. Anne is a Luxembourg expat who has lived in North London since 2006. She has always had the burning desire to host her own cookery show, ‘studying journalism, always pushing for food-related stories in my jobs, and cooking like a madwoman after work’, and after launching her online blog, her home country took note. ‘In Luxembourg word got around pretty fast since there were nearly no food blogs around that time,’ Anne says.

Today there are cameras crammed into her tiny kitchen and delicious dishes scattered all around – ‘It’s an absolute madhouse on these days,’ she says on filming–so how did a blog lead to a TV show? ‘I landed a cookbook deal with a major Luxembourg publisher last September. I then thought I should also do a TV show with the book. I’ve been working as the London correspondent for the national Luxembourg TV station RTL for the past three years, so I approached the commissioning editor and pitched my idea – and he liked the sound of it. It has been a huge learning curve from there on: I had to create my own TV production company (Currant Productions) and learn the ropes of professional TV production, all while developing recipes, shooting the book, and producing the show.’

At the time of writing, the TV show was about to be aired and the cookbook, Anne’s Kitchen, will be published on 24 October. Expect great British food like afternoon teas, pies and Sunday roasts, with Anne venturing to local foodie hotspots too. ‘We’ve recently filmed with the chefs of St John and The Old Red Cow in Clerkenwell,’ Anne says, ‘and in another episode we sampled street food in Camden. I love London for its variety and ever-changing food scene.’

Talking to Anne reminds me that sometimes we miss what’s right on our doorstep, but why is there such an interest back in Luxembourg? ‘Just like anywhere in the world, people in Luxembourg are fascinated with the iconography of Britain,’ Anne explains. ‘The Union Jack, the Queen, Big Ben, fish and chips – there are instantly so many colourful images that pop into the mind when one thinks of Britain.’

And the makers certainly feel like they are onto a winner. ‘The TV channel has already commissioned a second season of Anne’s Kitchen,’ our host beams. ‘We are still deciding on the destinations to cover, but one thing is for sure: I will still be cooking the recipes in my little North London flat.’